TALLAHASSEE, Fla. -- A study of oyster reefs in a once-pristine California coastal estuary found them devastated by invasive Atlantic Coast crabs and snails, providing new evidence of the consequences when human activities move species beyond their natural borders.

Led by marine biologist David L. Kimbro, now of The Florida State University Coastal and Marine Laboratory <http://www.marinelab.fsu.edu/> , the study shows that in Tomales Bay <http://www.tomalesbay.net/> , half the population of California's native Olympia oyster has perished because its habitat has fallen victim to the dysfunctional relationship between native species and non-native ones accidentally introduced.

The work of Kimbro, a postdoctoral associate at the FSU <http://www.fsu.edu/> lab, and colleagues from the University of California-Davis and its Bodega Marine Laboratory has magnified concerns that predator-prey mismatches between native and exotic species may lead to further losses of critical habitats that support marine biodiversity and ecosystems.

"First, our state has a remarkably productive native oyster population at risk in the Apalachicola Bay <http://en.wikipedia.org/wiki/Apalachicola_Bay> ," she said. "These oysters are sustainably harvested and provide critically important settlement habitat for an amazing array of species, so its loss would be devastating. Second, we know that in Florida's benign climate, exotic species are pretty easily established. One need only follow the trajectories of lionfish, Australian pine, Brazilian pepper and Burmese python for a grim view through the looking glass."

Kimbro and colleagues describe their findings in a paper ("Invasive species cause large-scale loss of native California oyster habitat by disrupting trophic cascades") that was recently published in the online and print editions of the peer-reviewed journal Oecologia <http://www.springerlink.com/content/r6532w3g47751034/?p=27aa2b92baf44a6b8bdf461f8b387f79π=2> .

Their study is expected to help guide habitat management and conservation efforts, including plans now being drawn up along the West Coast to restore native oysters.

"We've identified what my California colleagues call 'an important restoration bottleneck,' the attack on oysters by invasive species, which must be dealt with prior to undertaking oyster population enhancement and the rebuilding of remnant reefs," Kimbro said.

In California, said Kimbro, the artificial predator-prey mismatch has allowed high numbers of invasive snails to destroy the biological diversity of Tomales Bay, a coastal estuary about 40 miles northwest of San Francisco, by consuming and eliminating oyster habitat.

As an example, he points to the invasive European green crab from the Atlantic Coast (inadvertently introduced from Europe, so an exotic species even there). Smaller than California's native crab, it is less effective at controlling the snail population because it uses only brute force to kill its prey -- unlike its native counterpart, which is capable both of crushing the snails and using its claws like a can opener to peel open hard-to-crush larger shells.

Ecological consequences are profound when the species most affected by a predator-prey mismatch is a "foundation species" that supports biodiversity by creating extensive habitat, such as California's native Olympia oyster (Ostreola conchaphila), which provides critical nursery habitat for a suite of species including crabs, anemones and fishes.

Although Olympia oyster reefs are normally preyed upon by native predatory snails, said Kimbro, they are somewhat protected by the presence of native rock crabs that both consume native snails and force all others to spend more time hiding from crabs -- rather than eating the oysters.

But when Atlantic snails and crabs invade, the whole dynamic changes.

"You'd think similar-looking invasive and native species could be swapped in a system without adverse effects," he said. "But we have shown that, functionally, this is not the case."

In Tomales Bay, the exotic species occupy its inner reaches, where saline levels are lower. However, native predators cannot tolerate the inner bay's lower salinity, so they can't help to check the invasive snail population proliferating there. The invasive crabs are stuck in the inner bay because the natives hold the middle, with its higher salinity. Once upon a time, native oysters enjoyed a release from predation in the inner bay -- that is, until the invasive species moved in.

"While native predator-prey interactions that benefit oyster reefs are intricate and took a long time to develop, the invasive crab and snail don't have the historical exposure necessary to recreate these important interactions," Kimbro said. "A fellow researcher likened the native crabs and snails to a long-married couple who have learned to coexist, leaving oyster populations intact. But the lack of experience the invasive crabs and snails have with each other has led to the destruction of parts of the oyster population, much as an incompatible couple might destroy an entire family." 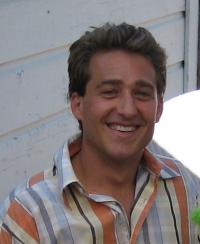 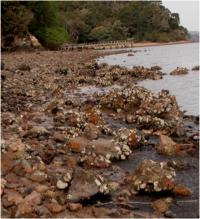