An international team, led by scientists from University of Exeter, Royal Netherlands Institute for Sea Research, Lancaster University and the Australian Research Council's Centre of Excellence for Coral Reef Studies (Coral CoE), compared the maximum upward growth rates of coral reefs with predicted rates of sea-level rise, and found many reefs will be unable to keep pace.

"Now more than ever, we must limit global greenhouse gas emissions. Our predictions, even under the best case scenarios, suggest that by 2100 the inundation of reefs will expose coastal communities to significant threats of shoreline change," said co-author Professor Peter Mumby of Coral CoE at The University of Queensland. "Healthier coral reefs will reduce the rate of seawater inundation."

Coral bleaching: Warmer water temperatures can result in coral bleaching. When water is too warm, corals will expel the algae living in their tissues, causing the coral to turn white. After bleaching, some corals survive and some die. 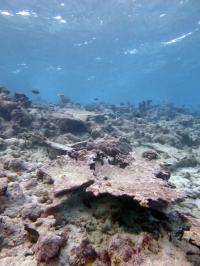