A University of Chicago expedition at Tell Edfu in southern Egypt has unearthed a large administration building and silos that provide fresh clues about the emergence of urban life.

The discovery provides new information about a little understood aspect of ancient Egypt—the development of cities in a culture that is largely famous for its monumental architecture.

The archaeological work at Tel Edfu was initiated with the permission of the Supreme Council of Antiquities, headed by Zahi Hawass, under the direction of Nadine Moeller, Assistant Professor at the Oriental Institute, University of Chicago. Work late last year revealed details of seven silos, the largest grain bins found in ancient Egypt as well as an older columned hall that was an administration center.

Long fascinated with temples and monuments such as pyramids, scholars have traditionally spent little time exploring the residential communities of ancient Egypt. Due to intense farming and heavy settlement over the years, much of the record of urban civilization has been lost. So little archaeological evidence remains that some scholars believe Egypt did not have a highly developed urban culture, giving Mesopotamia the distinction of teaching people how to live in cities.

"The traditional view of ancient Egypt has been biased by the fact that most excavation work so far has focused on temples and tombs. The mounds which comprise the remains of Egyptian cities were either ignored, buried under modern towns, or else destroyed by modern agricultural activities. Edfu is one of the very few remaining city mounds that are accessible for scientific study," said Gil Stein, Director of the Oriental Institute.

"The work at Edfu is important and innovative in that it finally allows us to examine ancient Egypt as an urban society, whose cities and towns housed bureaucrats, craft specialists, priests, and farmers. Nadine Moeller's discovery of silos and local administrative buildings shows us how these cities actually functioned as places where the agricultural wealth of the Nile valley was mobilized for the state. Grain as currency provided the sinews of power for the pharoahs," he added.

"Ancient Egyptian administration is mainly known from texts, but the full understanding of the institutions involved and their role within towns and cities has been so far difficult to grasp because of the lack of archaeological evidence with which textual data needs to be combined," Moeller said.

At Tell Edfu, archaeologists have uncovered what amounts to a downtown area. The community, halfway between the modern cities of Aswan and Luxor, was a provincial capital an important regional center. Tell Edfu is also rare, in that almost 3,000 years of Egyptian history are preserved in the stratigraphy of a single mound.

The administrative building and silos were at the heart of the ancient community. Because grain was a form of currency, the silos functioned as a bank and a food source. The silos' size indicates the community was apparently a prosperous urban center.

The grain bins are in a large silo courtyard of the 17th Dynasty (1630-1520 B.C.) and consist of at least seven round, mud-brick silos. With a diameter between 5.5 and 6.5 meters, they are the largest examples discovered within a town center.

The team unearthed an earlier building phase for the hall that predated the silos. In that phase, a mud-brick building with 16 wooden columns stood at the site. The pottery and seal impressions found in the hall date it to the early 13th Dynasty (1773-1650 B.C.). The building layout indicates that it may have been part of the governor's palace, which was typical of provincial towns.

There is no exact parallel for such a columned hall being part of the administrative buildings. Scribes did accounting, opened and sealed containers, and received letters in the column hall. The ostraca, or inscribed pottery shards, list commodities written on them.

The administrative center was used when Egypt's political unity was lost and a small kingdom developed at Thebes (modern Luxor) and controlled most of Upper Egypt.

"During this period, we can see an increase in connections between the provincial elite, such as the family of the governor, to the royal family at Thebes, who were keen on strengthening bonds through marriage, or by awarding important offices to these people," Moeller said.

"It is exactly at this period when Edfu seems to have been very prosperous, which can now be confirmed further by archaeological discoveries such as this silo-court, a symbol for the wealth of the town," she said. 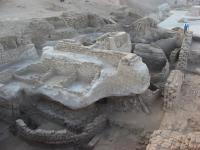