Researchers from the Georgia Institute of Technology and the Centers for Disease Control and Prevention (CDC) have developed a new laboratory test that can rapidly identify the bacterium responsible for staph infections. This new test takes advantage of unique isotopic labeling combined with specific bacteriophage amplification to rapidly identify Staphylococcus aureus.

Quickly and accurately detecting infections caused by S. aureus is critical because the pathogenic bacterium causes a broad spectrum of infections, ranging from acute to chronic disease, which need to be treated in a prompt manner with the correct antibiotic.

The test uses mass spectrometry to quantify the number of S. aureus organisms in a large number of samples in just a few hours, compared to a day or two for culturing techniques typically used to detect this bacterium.

"Our method for detecting staph infections using mass spectrometry will be valuable in a variety of situations, but will be crucial when a large number of people need to be tested very quickly, which will ultimately improve treatment," said Facundo Fernández, an associate professor in the Georgia Tech School of Chemistry and Biochemistry.

Details of the new staph infection detection method were published in the January issue of the journal Molecular and Cellular Proteomics. Partial funding for this research was provided by 3M and the CDC/Georgia Tech seed award program.

Fernández together with Carrie Pierce, Jon Rees and John Barr from the CDC's Division of Laboratory Sciences created this test.

"The simplicity of sample preparation, the low cost of required reagents and the increased availability of mass spectrometers in clinical laboratories make this new method a cost-effective way to rapidly and effectively detect staph infections, which must be treated quickly to prevent spread of the disease," explained Pierce, a research chemist at the CDC who also worked on the project as a graduate student at Georgia Tech.

To run their test, the researchers first inject a known amount of bacteriophage labeled with nitrogen-15 into a sample. The phages -- which are viruses that infect bacteria -- infect only live S. aureus cells, which then multiply and amplify the phage signal. Following a two-hour incubation, the researchers break up proteins from the phage shell into component peptides using a trypsin digest technique.

Then they analyze the sample using liquid chromatography with tandem mass spectrometric detection. By detecting peptides from the protein shell of the phage, the researchers can measure the concentration of S. aureus in the sample.

"The strength of this technique is coupling a well-characterized method for identifying bacteria with a modern detection device, such as a mass spectrometer," said Barr, biological mass spectrometry lead in the CDC's Division of Laboratory Sciences. "By labeling input phage with heavy nitrogen isotopes, we were able to use mass spectrometry to effectively distinguish between the parent and progeny phage, thus enhancing the selectivity of the method."

This prototype mass spectrometry-based technique has been optimized to detect low concentrations of bacteria that should allow clinicians to diagnose staph infections without the need for a significant culture period. Coupled with standard laboratory robotics, the test will reduce manual labor and subjective interpretation of results inherent in traditional techniques.

"An exciting aspect of this phage method is that with small modifications to the procedures, resistance and susceptibility to a number of different antibiotics can be determined in addition to bacterial identification," said Rees. "This additional piece of information may be the key to wide acceptance of the method." 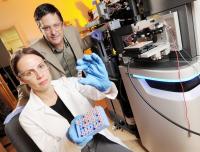 Carrie Pierce, US Centers for Disease Control and Prevention