As Tropical Storm Chris was strengthening into a short-lived hurricane, the Global Precipitation Measurement mission or GPM core satellite investigated the storm's rainfall and cloud heights. By July 12, Chris weakened to a tropical storm and was passing by Nova Scotia, Canada.

On July 11, Chris became a category two hurricane on the Saffir-Simpson hurricane wind scale. The GPM core observatory satellite flew above Chris on July 10, 2018 at 9:29 a.m. EDT (1329 UTC) when Chris was becoming a hurricane. Chris' movement toward the northeast over warmer waters east of the Atlantic coast were assisting in the tropical cyclone's intensification. GPM's Microwave Imager (GMI) and

Dual-Frequency Precipitation Radar (DPR) instruments revealed that intense bands of precipitation were wrapping around the eastern side of the intensifying tropical storm. GPM's radar (DPR Ku Band) indicated that rain was falling at over 123 mm (4.8 inches) per hour in strong convective storms east of CHRIS' forming eye.

The 3-D structure of precipitation of intensifying tropical storm Chris was revealed by the GPM satellite's radar (DPR Ku Band). In a simulated 3-D view created at NASA's Goddard Space Flight Center in Greenbelt, Maryland, the image, looking toward the northeast, clearly showed a rain band wrapping around the southern and eastern side of the tropical storm and Chris' forming eye wall. GPM's radar revealed that some storm tops in the forming eye wall were reaching heights above 13 km (8.1 miles).

At 5 a.m. EDT (0900 UTC) on July 12, the center of Tropical Storm Chris was located near latitude 42.1 degrees north, longitude 60.1 degrees west. That's about 245 miles (395 km) southeast of Halifax, Nova Scotia, Canada. Chris was moving toward the northeast near 35 mph (56 kph), and this general motion is expected to continue during the next 2 to 3 days. Maximum sustained winds have decreased to near 70 mph (110 kph) and additional weakening is anticipated during the next few days, according to the National Hurricane Center.

Chris is expected to become a post-tropical cyclone later today, July 12. The National Hurricane Center (NHC) predicts on the forecast track, the center of Chris will pass over or near extreme southeastern Newfoundland later today or tonight. 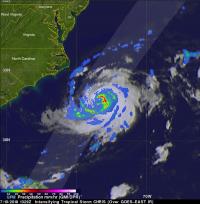