New research out of the University of Chicago has found evidence that the lobe-finned fish species Tiktaalik roseae was capable of both biting and suction during feeding, similar to modern-day gars. These results, published on Feb. 1 in the Proceedings of the National Academy of Sciences, provide evidence that bite-based feeding originally evolved in aquatic species and was later adapted for use on land.

T. roseae, a creature whose flat skull is reminiscent of an alligator, is a species that lived "right at the cusp of the transition from life in water to life on land," said senior author Neil Shubin, PhD, the Robert R. Bensley Distinguished Service Professor of Organismal Biology and Anatomy at UChicago. Studying its fossilized remains can provide new insights into how key traits for life on land originally evolved.

"Water is different from air, being much denser and more viscous," said first author Justin Lemberg, PhD, a postdoctoral researcher at UChicago. "This would have created unique problems for animals that were moving out of water and onto land for the very first time, including challenges in locomotion, reproduction, maintaining homeostasis and sensory processing and, of course, feeding. If you can't feed yourself on land, how can you colonize it?"

Most aquatic vertebrate species use suction feeding to help pull prey into their mouths. To create suction, many species of fish can expand their skulls laterally to expand their mouths and produce negative pressure. This movement of the skull bones relative to one another is called cranial kinesis.

"Suction feeding is ineffective on land, because it no longer works from a distance and it's hard to create the pressure seal needed to draw something in," said Lemberg. "So terrestrial vertebrates had to turn to other methods to capture prey. But the fossil evidence for how this happened is ambiguous, much more so than the transition from fin to limb. We wanted to look specifically at the sutures in the T. roseae skull, where the bones fit together, to see if they could tell us how the skull was being used."

The research team used advanced new computed tomography (CT) analysis to conduct a detailed examination of the morphology of the T. roseae skull. This allowed them to identify key new traits that had not been seen with other techniques, including sliding joints that would have allowed for the necessary cranial kinesis for the animal to expand its skull laterally to create suction.

"We discovered Tiktaalik in 2004 and at the time, prepared it with the classical methods, removing rock from the fossil grain by grain," said Shubin. "By the time Justin joined the project, we had access to this CT scanning technology, which lets us see the skull in 3D, taking each part out individually to see its shape and motion. Using the CT analysis transformed how we were able to think about the skull."

Investigators noted distinct similarities between T. roseae and earlier work analyzing the skulls of alligator gar, a "living fossil" species previously thought to only use lateral snapping motions to capture prey. In a 2019 study, Lemberg et. al. found that gar use lateral snapping and suction synergistically while feeding, thanks to unique sliding joints in their skulls that help create suction while biting.

These similarities led the researchers to believe that T. roseae may have fed in the same way, indicating that this adaptation likely evolved long ago, before animals ever colonized land.

"The thing that really stuns me is that every innovation, every invention used by tetrapods on land, originally appeared in some form in fish, including lungs, appendages, and now, feeding," said Shubin.

Beyond teaching us about the evolution of our distant, fishy ancestors, better understanding of the biology and behavior of creatures like T. roseae can provide new insights into our own anatomy and development.

"The neat thing about the water-to-land transition is that it's deeply personal to us," said Lemberg. "How did we get to where we are now, and what are some of the evolutionary quirks we've adapted to get here?"

Case in point: Lemberg pointed out that when analyzing the range of motion for the T. roseae skull, the three bones that appear to have moved the most are the bones that would eventually become incorporated into the mammalian middle ear.

"Those three bones in Tiktaalik are what we use to hear sound," Lemberg said. "A little bit of cranial kinesis that's maintained in modern mammals!"

About the University of Chicago Medicine & Biological Sciences

The University of Chicago Medicine, with a history dating back to 1927, is one of the nation's leading academic health systems. It unites the missions of the University of Chicago Medical Center, Pritzker School of Medicine and the Biological Sciences Division. Twelve Nobel Prize winners in physiology or medicine have been affiliated with the University of Chicago Medicine. Its main Hyde Park campus is home to the Center for Care and Discovery, Bernard Mitchell Hospital, Comer Children's Hospital and the Duchossois Center for Advanced Medicine. It also has ambulatory facilities in Orland Park, South Loop and River East as well as affiliations and partnerships that create a regional network of care. UChicago Medicine offers a full range of specialty-care services for adults and children through more than 40 institutes and centers including an NCI-designated Comprehensive Cancer Center. Together with Harvey-based Ingalls Memorial, UChicago Medicine has 1,296 licensed beds, nearly 1,300 attending physicians, over 2,800 nurses and about 970 residents and fellows. 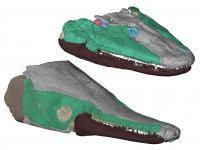