Researchers from Aarhus University have measured a new world record: Small ice algae on the underside of the Arctic sea ice live and grow at a light level corresponding to only 0.02% of the light at the surface of the ice. Algae are the primary component of the Arctic food web and produce food far earlier in the year than previously thought.

It is pitch dark all winter in the Arctic. And even when the spring sun appears in the sky, the compact ice and snow layer allows only a tiny amount of light to penetrate into the sea.

Here, in this extreme environment where temperatures are below the freezing point and salinity is higher than in the sea water, and where light penetration is extremely low for a large part of the year, the ice algae are found.

All algae need light to live, and it has long been a mystery why algae are found in a habitat with almost no light for long periods of the year.

Researchers from Aarhus University went to the Villum Research Station in the north-eastern corner of Greenland to study the living conditions of the algae. The results of the research efforts have just been published in the Journal of Geophysical Research.

"We worked on the sea ice in April-May, where there was a metre of sea ice and a metre of snow on top of the ice. With special ice corers we drilled holes in the ice so that we could measure the ice algae on the underside of the ice and collect samples," explains Lars Chresten Lund-Hansen, Arctic Research Centre, Aarhus University, who was in charge of the studies.

As primary producers constitute the base of the food web, ice algae are essential for the vulnerable Arctic marine ecosystem. Especially in the early spring where plankton algae in the sea are not yet active.

"Our measurements showed that the ice algae began to grow at a light intensity below 0.17 μmol photons m-2 s-1. This corresponds to less than 0.02% of the amount of light that reaches the surface of the snow on a sunny day," says Kasper Hancke, currently working at the Norwegian Institute for Water Research (NIVA) in Oslo, who was responsible for the field work.

This is the lowest light level so far where active photosynthesis and growth of ice algae have been observed.

The general view has been that ice algae do not obtain sufficient light for growth when they are covered by a more than 30-50 cm deep cover of snow and ice. The new measurements completely change that view and show that ice algae may play an important role much earlier in the spring in the Arctic than hitherto assumed.

During May, the depth of the snow on top of the sea ice did not change significantly - showing only a reduction from 110 to 91 cm. However, when the snow became warmer, its optical conditions changed so that a larger amount of light reached the underside of the sea ice, boosting the growth of the ice algae.

"Temperatures are rising in the Arctic. When the snow on top of the ice gets warmer, the algae residing on the underside of the ice receive more light. This may significantly impact the growth of the algae and the extent of the 'spring bloom'. This new knowledge must be considered in the puzzle of how the Arctic will respond to a warmer world," says Lars Chresten Lund-Hansen. 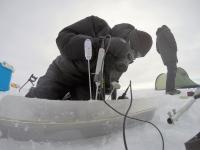