A new study by scientists from the Smithsonian, the Panamanian government and the U.S. Environmental Protection Agency, among other institutions, concludes that conserving old-growth tropical rainforest is "highly recommended" to prevent new outbreaks of viral and parasitic mosquito-borne diseases.

"We found that fewer mosquito species known to carry disease-causing pathogens live in forested areas compared to disturbed ones," said Jose Loaiza staff scientist at the Panamanian Institute of Scientific Research and High Technology Services (INDICASAT) and Research Associate at the Smithsonian Tropical Research Institute (STRI) in Panama. "Mosquito species from altered forest sites are more likely to transmit disease than mosquitoes native to an area of mature tropical forest."

Loaiza's team used DNA barcoding to identify almost 8,000 mosquito larvae representing more than 50 species from water standing in natural or artificial containers or ground water at 245 sites where tropical lowland forest was highly disturbed (Las Pavas on the west bank of the Panama Canal), somewhat disturbed (Achiote, on the east bank of the canal) and undisturbed (at the Smithsonian's research station on Barro Colorado Island).

The French attempt to build the Panama Canal failed because no one knew how malaria and yellow fever spread. The Cuban discovery that mosquitoes carried disease-causing agents made it possible for the U.S. to complete the interoceanic canal in 1914.

Researchers tested a controversial ecological model that predicted that the highest mosquito species diversity should occur at medium forest disturbance, known as the Intermediate Disturbance Hypothesis. They did not find this to be true.

"It may be possible to displace disease-carrying mosquitoes by introducing other species that compete with them at the larval stage," Loaiza said.

The study was conducted under an agreement between the Smithsonian and the Walter Reed Army Institute of Research with funding from the U.S. Environmental Protection Agency, Panama's National Secretariat for Science and Technology (SENACYT) and Brazil's Sao Paulo Research Organization's BIOTA Fapesp Program. 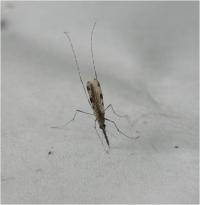