TORONTO, Aug. 22, 2013—The ability to draw spontaneously as well as from memory may be preserved in the brains of artists long after the deleterious effects of vascular dementia have diminished their capacity to complete simple, everyday tasks, according to a new study by physicians at St. Michael's Hospital.

The finding, scheduled to be released today in the Canadian Journal of Neurological Sciences, looked at the last few years of the late Mary Hecht, an internationally renowned sculptor, who was able to draw spur-of-the moment and detailed sketches of faces and figures, including from memory, despite an advanced case of vascular dementia.

"Art opens the mind," said Dr. Luis Fornazzari, neurological consultant at St. Michael's Hospital's Memory Clinic and lead author of the paper. "Mary Hecht was a remarkable example of how artistic abilities are preserved in spite of the degeneration of the brain and a loss in the more mundane, day-to-day memory functions."

Hecht, who died in April 2013 at 81, had been diagnosed with vascular dementia and was wheelchair-bound due to previous strokes. Despite her vast knowledge of art and personal talent, she was unable to draw the correct time on a clock, name certain animals or remember any of the words she was asked to recall.

But she quickly sketched an accurate portrait of a research student from the Memory Clinic. And she was able to draw a free-hand sketch of a lying Buddha figurine and reproduce it from memory a few minutes later. To the great delight of St. Michael's doctors, Hecht also drew an accurate sketch of famed cellist Mstislav Rostropovich after she learned of his death earlier that day on the radio.

While she was drawing and showing medical staff her own creations, Hecht spoke eloquently and without hesitation about art.

"This is the most exceptional example of the degree of preservation of artistic skills we've seen in our clinic," said Dr. Corinne Fischer, director at St. Michael's Hospital's Memory Clinic and another of the paper's authors. "As well, most of the other studies that have been done in this area looked at other kinds of dementia such as Alzheimer's disease or frontal temporal dementia, while this is a case of cognitive reserve in a patient with fairly advanced vascular dementia."

Dr. Fornazzari previously wrote a paper detailing a musician who, despite declining health because of Alzheimer's disease, could still play the piano and learn new music. As well, in October 2011, Dr. Fischer and colleagues looked at bilingual patients with Alzheimer's and discovered they had twice as much cognitive reserve as their unilingual counterparts.

Educators should take a page from these results and encourage schools to teach the arts – whether sculpture, painting or music – rather than cutting back on them, said Dr. Fornazzari. "Art should be taught to everyone. It's better than many medications and is as important as mathematics or history."

Both physicians want to lead a larger study of artists with neurological illnesses to further explore the importance of art and cognitive brain capacity.

St Michael's Hospital provides compassionate care to all who enter its doors. The hospital also provides outstanding medical education to future health care professionals in 27 academic disciplines. Critical care and trauma, heart disease, neurosurgery, diabetes, cancer care, care of the homeless and global health, are among the Hospital's recognized areas of expertise. Through the Keenan Research Centre and the Li Ka Shing International Healthcare Education Centre, which make up the Li Ka Shing Knowledge Institute, research and education at St. Michael's Hospital are recognized and make an impact around the world. Founded in 1892, the hospital is fully affiliated with the University of Toronto. 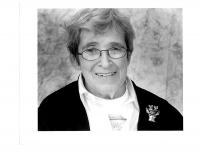