NASA's Aqua satellite and NOAA's GOES-15 satellite captured imagery of the Eastern Pacific Ocean's first named tropical storm, Alvin. Aqua and GOES-15 provided imagery of Alvin that provided a look at the overall storm and the temperatures of its cloud tops.

NASA's Aqua satellite flew over Tropical Storm Alvin just as it reached tropical storm status on May 15 at 2047 UTC (4:47 p.m. EDT). The Atmospheric Infrared Sounder (AIRS) instrument that flies aboard Aqua captured an infrared image of the storm that showed bands of thunderstorms on the tropical storm's western side were wrapping into the low-level center. Those bands of thunderstorms became more organized and more tightly wrapped by May 16 as the storm strengthened further.

AIRS data is infrared and gives an indication of temperature. With respect to tropical cyclones, AIRS provides temperatures of cloud tops and surrounding ocean surface temperatures, two factors important in determining the strength of a storm and what may happen with it. Cold cloud top temperatures, such as those seen in some of the bands around Alvin were near -62 Fahrenheit (-52 Celsius) and are indicative of strong uplift that can create strong, high thunderstorms with heavy rain potential.

NOAA's GOES-15 satellite captured a near-infrared view of Tropical Storm Alvin on May 16 at 1200 UTC (8 a.m. EDT) as it continued moving west and away from Mexico. This near-infrared view showed that Alvin had become more tightly wrapped and more organized. According to the National Hurricane Center, satellite imagery of Alvin shows very deep convection resembling a central dense overcast, but noted that the low-level center is displaced a fair distance west of the strongest convection (rising air that creates thunderstorms that make up the tropical cyclone).

At 5 a.m. EDT on May 15, Alvin had maximum sustained winds near 50 mph (85 kph). It was located far from land, about 705 miles (1,135 km) south-southwest of Manzanillo, Mexico, near 9.1 north latitude and 106.9 west longitude. Alvin was moving to the west-northwest at 10 mph (17 kph) and had a minimum central pressure near 1003 millibars. Twenty four hours before, Alvin's central pressure was near 1006 millibars. A drop in pressure indicates a strengthening low pressure area.

The National Hurricane Center noted that Alvin will be moving through warm waters over the next couple of days in the Eastern Pacific Ocean and is expected to reach hurricane strength by early on May 18 before weakening over the weekend of May 18 and 19. 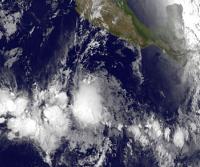