CORVALLIS, Ore. – A team of scientists last year presented evidence of a correlation between the migration patterns of ocean salmon and the Earth's magnetic field, suggesting it may help explain how the fish can navigate across thousands of miles of water to find their river of origin.

This week, scientists confirmed the connection between salmon and the magnetic field following a series of experiments at the Oregon Hatchery Research Center in the Alsea River basin. Researchers exposed hundreds of juvenile Chinook salmon to different magnetic fields that exist at the latitudinal extremes of their oceanic range. Fish responded to these "simulated magnetic displacements" by swimming in the direction that would bring that toward the center of their marine feeding grounds.

The study, which was funded by Oregon Sea Grant and the Oregon Department of Fish and Wildlife, will be published this month in the forthcoming issue of Current Biology.

"What is particularly exciting about these experiments is that the fish we tested had never left the hatchery and thus we know that their responses were not learned or based on experience, but rather they were inherited," said Nathan Putman, a postdoctoral researcher at Oregon State University and lead author on the study.

"These fish are programmed to know what to do before they ever reach the ocean," he added.

To test the hypothesis, the researchers constructed a large platform with copper wires running horizontally and vertically around the perimeter. By running electrical current through the wires, the scientists could create a magnetic field and control the both the intensity and inclination angle of the field. They then placed 2-inch juvenile salmon called "parr" in 5-gallon buckets and, after an acclimation period, monitored and photographed the direction in which they were swimming.

Fish presented with a magnetic field characteristic of the northern limits of the oceanic range of Chinook salmon were more likely to swim in a southerly direction, while fish encountering a far southern field tended to swim north. In essence, fish possess a "map sense" determining where they are and which way to swim based on the magnetic fields they encounter.

"The evidence is irrefutable," said co-author David Noakes of OSU, senior scientist at the Oregon Hatchery Research Center and the 2012 recipient of the American Fisheries Society's Award of Excellence. "I tell people: The fish can detect and respond to the Earth's magnetic field. There can be no doubt of that."

Not all of the more than 1,000 fish swam in the same direction, Putman said. But there was a clear preference by the fish for swimming in the direction away from the magnetic field that was "wrong" for them. Fish that remained in the magnetic field of the testing site – near Alsea, Ore. – were randomly oriented, indicating that orientation of fish subjected to magnetic displacements could only be attributable to change in the magnetic field.

"What is really surprising is that these fish were only exposed to the magnetic field we created for about eight minutes," Putman pointed out. "And the field was not even strong enough to deflect a compass needle."

Putman said that salmon must be particularly sensitive because the Earth's magnetic field is relatively weak. Because of that, it may not take much to interfere with their navigational abilities. Many structures contain electrical wires or reinforcing iron that could potentially affect the orientation of fish early in their life cycle, the researchers say.

"Fish are raised in hatcheries where there are electrical and magnetic influences," Noakes said, "and some will encounter electrical fields while passing through power dams. When they reach the ocean, they may swim by structures or cables that could interfere with navigation. Do these have an impact? We don't yet know."

Putman said natural disruptions could include chunks of iron in the Earth's crust, though "salmon have been dealing with that for thousands of years."

"Juvenile salmon face their highest mortality during the period when the first enter the ocean," Putman said, "because they have to adapt to a saltwater environment, find food, avoid predation, and begin their journey. Anything that makes them navigate less efficiently is a concern because if they take a wrong turn and end up in a barren part of the ocean, they are going to starve."

The magnetic field is likely not the only tool salmon use to navigate, however, Putman noted.

"They likely have a whole suite of navigational aids that help them get where they are going, perhaps including orientation to the sun, sense of smell and others," Putman said.

The Oregon Hatchery Research Center is funded by the Oregon Department of Fish and Wildlife and jointly run by ODFW and Oregon State University.

Note to editors: Images are available to illustrate this story at the links below: 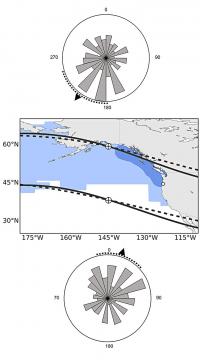