Centuries ago, the ancient networks of the Silk Road facilitated a political and economic openness between the nations of Eurasia. But this network also opened pathways for genetic exchange that shaped one of the world's most popular fruits: the apple. As travelers journeyed east and west along the Silk Road, trading their goods and ideas, they brought with them hitchhiking apple seeds, discarded from the choicest fruit they pulled from wild trees. This early selection would eventually lead to the 7,500 varieties of apple that exist today.

Researchers at Boyce Thompson Institute (BTI) have been working hard to excavate the mysteries of the apple's evolutionary history, and a new publication this week in Nature Communications reveals surprising insights into the genetic exchange that brought us today's modern, domesticated apple, Malus domestica.

In collaboration with scientists from Cornell University and Shandong Agricultural University in China, the researchers sequenced and compared the genomes of 117 diverse apple accessions, including M. domestica and 23 wild species from North America, Europe, and East and central Asia.

A tale of two roads

The most exciting outcome of this genomic comparison is a comprehensive map of the apple's evolutionary history. Previous studies have shown that the common apple, Malus domestica arose from the central Asian wild apple, Malus sieversii, with contributions from crabapples along the Silk Road as it was brought west to Europe.

With the results of this new study, the researchers could zoom in on the map for better resolution. "We narrowed down the origin of domesticated apple from very broad central Asia to Kazakhstan area west of Tian Shan Mountain," explained Zhangjun Fei, BTI professor and lead author of this study.

In addition to pinpointing the western apple's origin, the authors were excited to discover that the first domesticated apple had also traveled to the east, hybridizing with local wild apples along the way, yielding the ancestors of soft, dessert apples cultivated in China today.

"We pointed out two major evolutionary routes, west and east, along the Silk Road, revealing fruit quality changes in every step along the way," summarized Fei.

Although wild M. sieversii grows east of Tian Shan Mountain, in the Xinjiang region of China, the ecotype there was never cultivated, and did not contribute to the eastern domesticated hybrid. Instead, it has remained isolated all these centuries, maintaining a pool of diversity yet untapped by human selection. First-author Yang Bai remarked, "it is a hidden jewel for apple breeders to explore further."

The sour (but firm) side of the story

As the apple traveled west along the Silk Road in the hands of travelers, trees grew from dropped seeds and crossed with other wild apple varieties, including the incredibly sour European crabapple, Malus sylvestris. The sourness of crabapples was once described by Henry David Thoreau as, "sour enough to set a squirrel's teeth on edge and make a jay scream."

The authors found that M. sylvestris has contributed so extensively to the apple's genome that the modern apple is actually more similar to the sour crabapple than to its Kazakhstani ancestor, M. sieversii.

"For the ancestral species, Malus sieversii, the fruits are generally much larger than other wild apples. They are also soft and have a very plain flavor that people don't like much," Bai remarked.

The hybridization between ancient cultivated apples and M. sylvestris, followed by extensive human selection, gave us new apples that are larger and fuller in flavor, and with a crispy firmness that gives them a longer shelf life.

Bai further explained, "The modern domesticated apples have higher and well-balanced sugar and organic acid contents. That is how the apple started to become a popular and favored fruit."

A sizeable discovery with big potential

A new flavor and texture may have put the apple into our pies, but size matters a great deal too. In crop breeding, one of the most desirable traits selected for is a larger fruit or seed. In nearly all cases of fruit domestication, the wild ancestor has tiny fruit that were shaped into their large, nutritious cultivated counterpart through centuries of selection. For example, the domesticated tomato is at least 100 times larger than its wild relatives.

"This is not quite the case for apple. Its domestication started with a medium to large-sized fruit," asserted Bai. "It has great potential for further enlarging fruit size in breeding programs."

By comparing the many different apple genomes, the researchers were able to find evidence supporting two different evolutionary steps contributing to apple's size increase - one before, and one after domestication.

The large size of Malus sieversii compared to other wild apples gave it a great advantage for domestication. It had already evolved to a suitable size before it was even cultivated, likely making it more attractive to growers who would then not need to spend much effort selecting for larger fruits.

Such a lack of size selection also means that the genes responsible for size increase still retain a variability that holds potential for future selection. But it can also make identification of the size-associated genes difficult. Despite this, the extensive breadth of the new study allowed the researchers to identify several genetic markers underlying the fruit size increases, which is great news for breeders who might want to further increase the apple's girth.

The apple (genome) falls far from the tree

While consumers may ask for better apples, breeders are met with difficulty when it comes to polishing apple traits. One major issue is that apple can't self-pollinate. It can only cross with other varieties, introducing too much genetic variability with each generation. While genetic change is necessary to tweak a trait of interest, too much change will tweak everything. Combined with the several years to get from apple seed to fruit, this makes breeding for desired traits a challenge.

"The genomic regions and candidate genes under human selection for a certain trait identified in this study will be very helpful and inspiring to breeders working on the same trait," asserted Fei, who expects that the results from this study will, "improve speed and accuracy of 'marker-assisted selection' in apple."

Now with an extensive and diverse collection of representative apple genomes, thorough and careful analyses have allowed Fei's group to distinguish important genetic markers that will greatly aid breeders in their quest for better apples - be it for disease resistance, shelf-life, taste, or even size.

When asked how big she thinks an apple could get through breeding, Bai responded with a twinkle in her eye, "Well, in my wild imagination, maybe one day it can be as big as a watermelon." 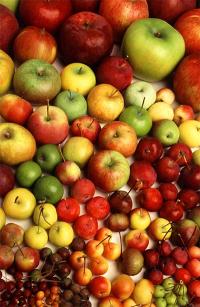