A variety of cancers are treated with the anti-tumor agent bleomycin, though its disease-fighting properties remain poorly understood.

The paper is co-authored by professor Sidney Hecht, director of Biodesign's Center for BioEnergetics. The study presents, for the first time, alternative biochemical mechanisms for DNA cleavage by bleomycin. The new research will help inform efforts to fine-tune the drug, improving its cancer-killing properties, while limiting toxicity to healthy cells.

Results of the study recently appeared in the Journal of the American Chemical Society.

Bleomycin is part of a family of structurally related antibiotics produced by the bacterium, Streptomyces verticillus. Three potent versions of the drug, labeled A2 , A5 and B2 are the primary forms in clinical use against cancer.

Bleomycin's cancer-fighting capacity was first observed in 1966 by Japanese researcher Hamao Umezawa. The drug gained FDA approval in 1973 and has been in use since then, particularly for the treatment of Hodgkin's lymphoma, squamous cell carcinomas, and testicular cancer.

One of the attractive properties of bleomycin is the fact that it can be administered in fairly low doses, relative to many other cancer therapies. Previous research has shown that bleomycin can cause death in aberrant cells by migrating to the cell nucleus, binding with DNA and subsequently causing breaks in the DNA sequence. Following a binding event, a molecule of bleomycin can effectively slice through one or both strands of DNA.

Cleavage of DNA is believed to be the primary mechanism by which bleomycin kills cancer cells, particularly through double-strand cleavages, which are more challenging for the cellular machinery to repair. "There are several mechanisms for repairing both single-strand and double-strand breaks in DNA, but double-strand breaks are a more potent form of DNA lesion," Roy says.

The Center for BioEnergetics has been studying several forms of bleomycin, developing a sizeable library of variants, with the goal of engineering the best bleomycin analog. Roy is particularly interested in the subtle biochemistry of bleomycin, including the specificity of its binding regions along the DNA strand and the drug's detailed mechanisms of DNA cleavage.

For the new study, bleomycin A5 was used. Bleomycin A5 has similar DNA binding and cleaving properties as bleomycin A2 and B2. Previous research has revealed that bleomycin binds with highly specific regions of the DNA strand, typically G-C sites, where a guanosine base pairs with a cytidine. Further, the strength of this binding is closely associated with the degree of double-strand DNA cleavage.

From a pool of random DNA sequences, a library of 10 hairpin DNAs was selected, based on their strong binding affinity for bleomycin A5. Hairpin DNAs are looped structures, which form when a segment of a DNA strand base-pairs with another portion of the same strand. These hairpin DNAs were used to investigate double-strand cleavage by bleomycin.

Each of the 10 DNA samples underwent double-strand cleavage at more than one site. Further, all of the observed cleavage sites were found within or in close proximity to an 8 base pair variable region, which had been randomized to create the original library. Examination of the 10 DNA samples exposed to bleomycin revealed a total of 31 double-strand cleavage sites. Earlier research had described the form of double-strand DNA cleavage by bleomycin which occurred at 14 of these sites; however the remaining 17 cases of double-stranded cleavage occurred through a different mechanism, described for the first time in the present study.

As in earlier studies, iron (FeII) was used as a cofactor for bleomycin in the binding events. Two types of bleomycin binding and cleavage activity are detailed in the paper. In the first, bleomycin and its iron cofactor (Fe.BLM) bind with hairpin DNA at a primary site. Typically, this is a site with a particular sequence: 5´-G-Py-B-3´. (Here, 5´ refers to one end of the DNA hairpin, G refers to the base guanosine, Py refers to a pyrimidinic base—either cytidine or thymidine, B refers to any nucleobase and 3´ refers to the other DNA end.

The result of this binding is the abstraction of a hydrogen atom at the primary site. Two results are possible following the primary binding event, one causing a single-strand break in the primary site, the other, failing to produce full cleavage of the strand, producing instead a site lacking either a purine or pyrimidine base. This is known as an AP site.

The two-stage process of double strand cleavage by bleomycin and its iron cofactor is outlined in figure 1.

This important study proposes, for the first time, a plausible mechanism for DNA cleavage by bleomycin that may lead to tumor cell killing as well as identifying the most common sequences involved in DNA site binding and subsequent strand breakage.

Roy stresses that a great deal of work remains, to elucidate the biochemical causes of tight binding by bleomycin. Further, bleomycin's specificity for cancer cells remains enigmatic. New work in the Hecht lab however has identified the carbohydrate moiety of the molecule as being responsible for tumor cell targeting.

"Cancer is still a black hole," says Roy. "We're trying to make this particular molecule (bleomycin) better. There is still so much to learn."

In addition to his appointment at Biodesign, Basab Roy is a graduate student in the Department of Chemistry and Biochemistry at ASU's College of Liberal Arts and Sciences. 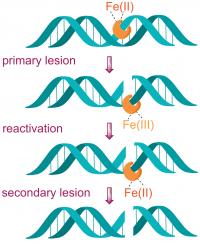