Scientists at the Centro Nacional de Investigaciones Cardiovasculares (CNIC), working in partnership with researchers at the Institut de Recherches Cliniques de Montréal (IRCM) in Canada, have identified Meis transcription factors as essential biomolecules for the formation and antero-posterior patterning of the limbs during embryonic development.

In the study, published in Nature Communications, the research team carried out an in-depth characterization of the Meis family of transcription factors. Genetic deletion of all four family members showed that these proteins are essential for the formation of the limbs during embryonic development. "An embryo that develops in the absence of Meis does not grow limbs," said study coordinator Miguel Torres, who leads the Genetic Control of Organ Development and Regeneration group at the CNIC.

Embryonic development is a highly complex process involving interactions among a large array of molecules to ensure the correct formation of a specific organ or tissue from a small initial number of cells. The limbs, explained first author Irene Delgado, "start to form as bulges on the flank of the embryo called limb buds. Growth of the limb bud eventually results in the formation of the skeletal components of the limb."

One of the factors that plays a crucial role in the developing limb is a group of transcription factors called Meis. "In a normal embryo, the Meis genes are expressed very early during the formation of the limb buds," the scientists explained.

In the new study, in-depth molecular characterization of developing mouse embryos revealed that Meis factors initiate a signaling cascade that is essential for limb bud development and involves contributions from Fgf10 and Lef1. "Our results identify roles for Meis transcription factors in the developing limb and reveal their participation in essential pathways for limb development. During ealry limb bud formation, Meis transcription factors are essential for inducing the expression of Fgf10 and Lef1."

"Meis proteins, together with other factors like Hox and Tbx, bind to regulatory DNA sequences of the Fgf10 and Lef1 genes and regulate their expression," explained Irene Delgado.

An embryo that lacks Meis genes is unable to grow limbs, but the presence of just one of these four genes (a single allele) "is enough to initiate limb development and also reveals other functions of Meis, such as its importance for the formation of the proximal limb structures (pelvis and femur) and for antero-posterior limb patterning," said Miguel Torres.

Nevertheless, the pelvis and femur of embryos with a single Meis allele are smaller than those of a normal embryo. Moreover, added Delgado, "These embryos have defects in, or simply lack, posterior skeletal elements such as the fibula and posterior digits."

The authors further demonstrated that the molecular basis for these defects is failed initiation of the expression of the Sonic Hedgehog gene, which is essential for antero-posterior limb patterning. 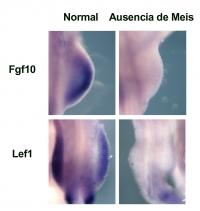