The Transcendental Meditation® technique may be an effective approach to improve math and English academic achievement in low-performing students, according to a new study published in the journal Education.

The study was conducted at a California public middle school with 189 students who were below proficiency level in English and math. Change in academic achievement was evaluated using the California Standards Tests (CST).

"The results of the study provide support to a recent trend in education focusing on student mind/body development for academic achievement," said Dr. Ronald Zigler, study co-author and associate professor at Penn State, Abington. "We need more programs of this kind implemented into our nation's public schools, with further evaluation efforts."

Students who practiced the Transcendental Meditation program showed significant increases in math and English scale scores and performance level scores over a one-year period. Forty-one percent of the meditating students showed a gain of at least one performance level in math compared to 15.0% of the non-meditating controls.

Among the students with the lowest levels of academic performance, "below basic" and "far below basic," the meditating students showed a significant improvement in overall academic achievement compared to controls, which showed a slight gain.

"This initial research, showing the benefits of the Quiet Time/Transcendental Meditation program on academic achievement, holds promise for public education" said Sanford Nidich, EdD, lead author and professor of education at Maharishi University of Management. "The findings suggest that there is an easy-to-implement, value-added educational program which can help low-performing minority students begin to close the achievement gap," said Dr. Nidich.

Faculty surveyed as part of the project reported the Quiet Time/Transcendental Meditation program to be a valuable addition to the school. They reported the students to be calmer, happier, and less hyperactive, with an increased ability to focus on schoolwork. In terms of the school environment, faculty reported less student fights, less abusive language, and an overall more relaxed and calm atmosphere since implementation of the program.

The study was supported by the David Lynch Foundation. 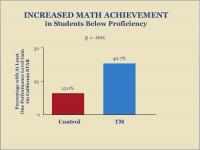