EUGENE, Ore. -- Feb. 23, 2016 -- Scientists have unlocked the mystery of mimicry used by Dracula orchids to attract flies and ensure their survival. A team led by University of Oregon researchers did it using a 3-D printer.

The research, done in Ecuador, is a win in the field of evolutionary biology, and the approach used in the project is readily applicable to studies of other plant-pollinator systems, said the UO's Barbara "Bitty" Roy, a professor of biology. Information gleaned from such research, she added, should help improve conservation efforts in endangered habitats.

The National Geographic Society and National Science Foundation, including a $573,000 grant under the American Recovery and Reinvestment Act in 2009, supported the research, which is detailed in a paper placed online ahead of print in the journal New Phytologist.

"Mimicry is one of the best examples of natural selection that we have," Roy said. "How mimicry evolves is a big question in evolutionary biology. In this case, there are about 150 species of these orchids. How are they pollinated? What sorts of connections are there? It's a case where these orchids plug into an entire endangered system. This work was done in the last unlogged watershed in western Ecuador, where cloud forests are disappearing at an alarming rate."

Dracula orchids grow in Central America and northwest reaches of the Andes Mountains in South America. The Dracula label literally means "little dragon" because of a face-like feature in the flowers, but many observers say the feature resembles the image of Count Dracula as a bat that is widely known in vampire depictions found in literature and the movies. One orchid species is named Dracula vampira.

"Dracula orchids look and smell like mushrooms," said the study's lead author Tobias Policha, an adjunct instructor and plant scientist in the UO's Institute of Ecology and Evolution. "We wanted to understand what it is about the flowers that is attractive to these mushroom-visiting flies."

The researchers closely studied 22 orchids, looking piece-by-piece, to determine where specific scents are produced in the flowers and which ones possibly lure pollinators -- in this case 11 species of fruit flies that thrive among wild mushrooms that grow near the orchids.

To test their work in the forest, the researchers turned to odor-free, silicone copies of orchids made with a 3-D printer.

The 3-D copies -- the same shape and size of real ones -- allowed team members to apply various color patterns and extracts of the various scents. Among the mix of experiments they also used chimeras -- 3D-bassed copies with real and artificial parts -- enabling them to disentangle which parts were attractive. Flies were drawn to the fabricated plants as if they were real.

The 3-D versions were produced by co-author Melinda Barnadas, co-owner of Magpie Studio, which fabricates scientific artwork for museums. Barnadas, also a visual artist at the University of California, San Diego, spent time with the team studying the orchids in Ecuador.

The study determined that the key part of the orchids' mimicry is the mushroom-like labellum, which is attached to the plant's narrow reproductive column.

"What the orchid wants the fly to do when it arrives is to crawl into the column, whereupon the orchid sticks a pollinium onto the fly so that the fly can't possibly get it off," Roy said. "The fly then goes to another orchid, which then pulls it off."

A pollinium is gooey package, resembling a saddlebag, and contains an orchid's pollen. Flies spend up to an hour inside the plant's reproductive column, which is a snug fit to a select few of the more than 80 species of drosophilid flies that have been identified so far in the area.

The flies also feast on yeast in the flowers, often mate on the orchids and then lay their eggs on nearby wild mushrooms, ensuring their own survival.

Other co-authors were Aleah Davis, a UO undergraduate student in the Robert D. Clark Honors College during the research and who has since graduated; Bryn T.M. Dentinger, a former UO postdoctoral researcher; and Robert A. Raguso of Cornell University's Department of Neurobiology and Behavior. Dentinger now is with the Jodrell Laboratory of the Royal Botanic Gardens, Kew, and the Institute of Biological, Environmental and Rural Sciences at Aberystwyth University, both in the United Kingdom. 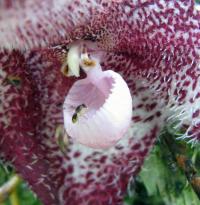