In a new synthesis of past work, researchers found that women consistently score lower than men on common assessments of conceptual understanding of physics. However, when examining the factors that may account for these differences (such as student background and test-taking strategies), no clear pattern emerged. Thus, despite previous claims that the causes of this gender gap have been pinpointed, the problem remains unsolved and poorly understood. This has critical importance for science education reform.

Many changes have been made in college science instruction in the past decades. Numerous classrooms have shifted from a traditional lecture presentation to more interactive formats that aim to engage students in building their own knowledge. Physics has been a forerunner of this movement, in part because of early and ongoing research on how students grapple with key ideas in this difficult field. Comparisons of student understanding have been made possible through the development of "concept inventories" – multiple choice tests of student understanding, developed through years of research, enabling the same test to be given to students in a variety of classrooms.

"These tests have been very important in the history of physics education reform," said Dr. McKagan, who co-authored the new analysis. Past studies have shown that students in classrooms using interactive techniques get significantly higher scores on these tests than do students in more traditional lecture settings; "these results have inspired a lot of people to change the way that they teach," said McKagan.

But several studies had also reported that women's scores on these tests are typically lower than men's. "We set out to determine whether there is a gender gap on these concept inventories," said lead author Madsen, "and if so, what causes it."

The authors combined results from 26 previous studies of several common physics concept inventories, covering 12 different institutions. They found that women almost always score lower than men on these tests (12% on average for tests about force and motion), both before instruction, and at the end of the course. The same trend is also found when comparing male and female students' gains on the tests, showing that this gap is not simply due to differing levels of incoming knowledge. There is some variation across studies – the gender gap sometimes goes up and sometimes goes down, but rarely goes away, observe the authors. Women also receive lower scores on course exams (4% on average) than do men, which can impact course grades. These results mirror those in other studies of gender differences on other types of science and math tests, such as standardized placement exams.

One key finding from the study is that, while there is a gender gap in performance on concept inventories, the performance of both men and women is improved when they experience an interactive classroom. These teaching techniques improve student gains on these tests by four times as much as the size of the gap between men's and women's scores. Thus, previous results on the positive impact of interactive teaching techniques are still valid for both men and women.

Another important result of the authors' analysis is that no obvious factor appears to be responsible for women's lower scores. Unlike the impact of interactive engagement on student performance, "we haven't found a miracle that solves the gender gap," said McKagan. The authors cross-checked the results from studies investigating the potential impact of student background, their beliefs about physics, the teaching method used, their ingrained stereotypes about women's abilities, and the wording of test questions. Some studies – several of which were quite high-profile – demonstrated that one or more of these elements had a significant influence, but most were contradicted in other studies. One of the more promising findings is that women's poorer background preparation in physics may account for much of the gender gap, but those results have not been replicated outside of a single university and may be reflective of several underlying causes.

Such contradictory results suggest that gender differences in physics performance are a particularly thorny and complex issue. When a single study claims to have found a solution to gender differences in science, it should be treated with healthy skepticism. (Research on female performance in math and science more broadly have also met with contradictory results, though social factors – such as stereotypes – appear to contribute powerfully to gender gaps.)

While the gender gap on physics concept inventories remains an unsolved problem, the researchers suggest some take-home messages for instructors. One is that the use of interactive teaching techniques can improve student understanding for both genders. Another is simply to recognize that there is a gender gap on conceptual assessments and exams, and that addressing this gap will require creativity on the part of the instructor. Prior work suggests some strategies that an instructor may take (such as having students reflect on their values prior to a test), but it is important not to rely too heavily on any one technique. The authors call for researchers to devote additional attention to investigating the underlying causes of this gender gap and possible interventions.

"The gender gap on concept inventories in physics: what is consistent, what is inconsistent, and what factors influence the gap?" A. Madsen, S. B. McKagan and E. C. Sayre, Physical Review Special Topics – Physics Education Research. To be published online November 7 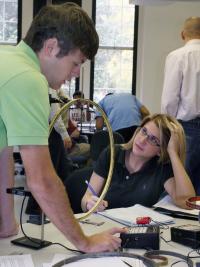