A new study has found for the first time that ocean warming is the primary cause of retreat of glaciers on the western Antarctic Peninsula. The Peninsula is one of the largest current contributors to sea-level rise and this new finding will enable researchers to make better predictions of ice loss from this region.

The research, by scientists at Swansea University and British Antarctic Survey, is published in the journal Science today (Friday, July 15). The study reports that glaciers flowing to the coast on the western side of the Peninsula show a distinct spatial correlation with ocean temperature patterns, with those in the south retreating rapidly but those in the north showing little change. Some 90% of the 674 glaciers in this region have retreated since records began in the 1940s.

"Scientists know that ocean warming is affecting large glaciers elsewhere on the continent, but thought that atmospheric temperatures were the primary cause of all glacier changes on the Peninsula. We now know that's not the case.

"The numerous glaciers on the Antarctic Peninsula give a key insight as to how environmental factors control ice behaviour on a wide scale. Almost all glaciers on the western side end in the sea, and we've been able to monitor changes in their ice fronts using images as far back as the 1940s. Glaciers here are extremely diverse and yet the changes in their frontal positions showed a strong regional pattern.

"We were keen to understand what was causing the differences, in particular why the glaciers in the north-west showed less retreat than those further South and why there was acceleration in retreat since the 1990s. The ocean temperature records have revealed the crucial link."

The team studied ocean temperature measurements around the Peninsula stretching back several decades, alongside photography and satellite data of the 674 glaciers.

The north-south gradient of increasing glacier retreat was found to show a strong pattern with ocean temperatures, whereby water is cold in the north-west, and becomes progressively warmer at depths below 100m further south. Importantly, the warm water at mid-depths in the southerly region has been warming since as long ago as the 1990s, at the same time as the widespread acceleration in glacier retreat.

"These new findings demonstrate for the first time that the ocean plays a major role in controlling the stability of glaciers on the western Antarctic Peninsula.

"Where mid-depth waters from the deep ocean intrude onto the continental shelf and spread towards the coast, they bring heat that causes the glaciers to break up and melt. These waters have become warmer and moved to shallower depths in recent decades, causing glacier retreat to accelerate."

"The glaciers on the Antarctic Peninsula are changing rapidly - almost all of the Peninsula's glaciers have retreated since the 1940s. We have known the region is a climate warming hotspot for a while, but we couldn't explain what was causing the pattern of glacier change. 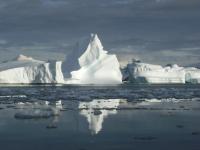 Icebergs Calved off from the Glaciers in Marguerite Bay