Specific bacteria living in the human vagina may play a previously unrecognized role in the sexual transmission of HIV. Ragon Institute researchers, working with young, healthy, South African women, found that individuals with vaginas dominated by pro-inflammatory bacterial species were at a 4-fold higher risk of acquiring HIV than those with "healthy" vaginal bacteria. Meanwhile, viruses in the female genital tract showed no correlation with HIV risk. The study appears January 10 in the journal Immunity.

Participants with high-risk bacterial communities, which are commonly found in the population of women studied, also had increased numbers of genital CD4+ T cells--white blood cells that are HIV's primary target. Furthermore, the researchers saw that the intravaginal introduction of pro-inflammatory species of bacteria found in the volunteers could increase the presence of mucosal CD4+ T cells in a mouse model. The research suggests that specific genital bacteria can increase HIV risk by making it easier for the virus to find a foothold. They now want to pursue probiotic or prebiotic therapies to reduce HIV acquisition in women living in vulnerable communities.

"We're very excited about these findings. We've used modern molecular approaches to characterize the vaginal microbiome and link specific bacteria to HIV acquisition risk in young women living in Sub-Saharan Africa, where HIV is most profound," says first author Christina Gosmann, a postdoctoral research fellow at the Ragon Institute of MGH, MIT and Harvard. "There is a direct translational application that comes from this work. By identifying bacterial species and communities associated with HIV risk, we provide specific targets that may be leveraged to develop new preventive strategies and to improve the effectiveness of existing preventive measures."

Over 900 women, ages 18-23, from the KwaZulu-Natal province of Durban, South Africa, have taken part in the FRESH (Females Rising through Education, Support, and Health) study to date. The region is notable because it has some of the highest HIV incidence and prevalence rates in all of Africa. Volunteers visited the research site twice a week and were enrolled in a poverty alleviation program, which provided job skills training, HIV prevention education, and access to condoms and HIV pre-exposure prophylaxis. They also participated in biological studies involving the collection of blood and genital mucosal samples.

Senior author Douglas Kwon (@kwonlab), a physician scientist at the Ragon Institute of MGH, MIT and Harvard, and Director of Clinical Operations at the Ragon Institute, was drawn to the community because of the high burden of HIV among women in KwaZulu-Natal and its potential link to genital inflammation. It has been shown that certain sexually transmitted infections, such as chlamydia, can cause inflammation and increase HIV risk, but that would not have accounted for all of the cases. Based on a paper his group published in 2015, Kwon knew that certain bacteria present in South African women are a major instigator of vaginal inflammation (10.1016/j.immuni.2015.04.019), and he thought this new work could connect some dots.

"We think of a healthy microbiome as being Lactobacillus dominant--that's what we are taught in medical school--but those studies are mostly based on white women in developed countries. When we did our first study we found that less than 10% of the women in our South African cohort had this classically 'healthy' community," he says. "Seventy percent of our volunteers had diverse bacterial communities with low Lactobacillus abundance. Here we show that not only are those more diverse communities associated with higher levels of genital inflammation but also with significantly increased HIV acquisition."

There are still questions around why differences between vaginal microbiomes exist. There may be a genetic component to it--in which some people naturally have environments that harbor some species of bacteria over others--as well as environmental variables (diet, sexual behavior, contraception methods, hygiene, etc.). Despite looking at several factors, Kwon and his team could not identify any behavioral or environmental associations.

However, the work does identify a new mechanism to potentially reduce vaginal inflammation and thus HIV risk by helping women with diverse bacterial communities in their genital tract become more Lactobacillus dominant. It's currently a challenge to do this kind of microbial redesign--antibiotics reduce microbial burden but fail to induce major changes in bacterial composition, and from fecal transplant studies in the gut we know that bacterial populations return to a baseline population even after a major shift-- so more work is needed to attempt a durable change in the vaginal microbiome.

The research also raises questions about how bacteria living in other parts of the body may relate to HIV transmission, and whether they play a role in how other vulnerable populations are affected by the disease. "As we start to look deeply into these other microbial communities in and on the body and see their importance, I think people will realize that there's more to microbiome research than the gut," Kwon says.

This work was supported by the Collaboration for AIDS Vaccine Discovery of the Bill and Melinda Gates Foundation, the International AIDS Vaccine Initiative (IAVI), the NIAID and the Harvard Center for AIDS Research. The authors received additional support from the Burroughs Wellcome Fund, the National Institute of General Medical Sciences, the NIH, and a Doris Duke Clinical Scientist Development Award. The content is solely the responsibility of the authors and does not necessarily represent the official views of the NIGMS or the NIH. 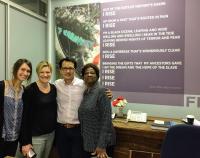