"We show where the majority of nesting female turtles spend the most of their life, meaning that in addition to their nesting beaches we can also protect important marine habitats where they feed," said lead author Julia Haywood, of the University of Exeter.

"Nearly half of the Cyprus nesting population feeds on the Tunisian Plateau, an area known to have some of the highest turtle bycatch (accidental catch by humans fishing) in the world.

"Therefore, we support recommendations that this area should be conserved."

The study tracked turtles from rookeries in Greece and Cyprus using data from 1993 to 2018.

"By studying these turtles for so long we show these females stay in the same feeding area over decades, which means if these habitats are damaged or have high fishing activities then the turtles will unfortunately not move," Haywood said.

"This work shows the importance of combining satellite tracking and stable isotopes to help understand these elusive animals."

The work was carried out in collaboration with the local conservation groups: the Society for the Protection of Turtles in North Cyprus (SPOT) and ARCHELON, the Sea Turtle Protection Society of Greece.

Robin Snape, of SPOT, said: "Mediterranean loggerheads lay their nests in the European Union, just at the time of year when hundreds of thousands of European tourists arrive on holiday.

"For the rest of the year, many female loggerheads are growing and foraging in the waters off Africa, where mortality in industrialised fisheries and even direct consumption of turtles are still big concerns.

"Each year at least 10,000 turtles die as accidental bycatch off North Africa, while illegal trade in turtle meat persists.

"This research allows prioritisation of conservation resources to specific threats in specific areas."

The paper, published in the journal Diversity and Distributions, is entitled: "Spatial ecology of loggerhead turtles: Insights from stable isotope markers and satellite telemetry." 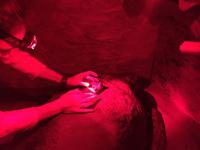