Survival of the fittest is a fundamental concept in Darwin's theory of natural selection which drives evolution.

However, when it comes to agriculture and plantbreeding, the traits which make a single plant individual a good competitor and increases its fitness as an individual is not necessarily the same characteristics that increase the total yield of a group of plants on the field.

These are the findings in a new study from Copenhagen University just published in the journal Ecology. Jacob Weiner, Professor in plant ecology, is responsible for new research within the area Evolutionary Agroecology or as it is also known, Darwinian Agriculture.

He explains how the results showed that competitive wheat varieties only gave mediocre yields when they were grown in groups of the same variety, as is the norm in agriculture.

On the contrary, less competitive varieties gave larger yields under the same conditions. If implemented within plant breeding these results may be used to increase agricultural production yields. Group dynamics beats individual performance Jacob Weiner explains that the results points towards the implementation of a new perspective within plant breeding.

In this perspective the concepts of group selection should be applied during the development of new plant breeds, instead of selecting based on individual fitness as it is often done within plant breeding and research.

"The crops can be compared to a sports team. If every player is rewarded for scoring the goals, the team will not score as many goals as it would, had the players cooperated. In the same way, we can't increase crop yields by selecting the most successful plant individuals for breeding," Jacob Weiner says.

One of the scientific hypotheses behind the research explains this. It is based on the fact that "selfish" individual plants - the best competitors - use a lot of resources to compete with each other and thereby have fewer resources left for producing higher yields compared to less competitive plants.

According to Jacob Weiner the results should lead to a shift of the general mindset within present day plant breeding.

The new principles should encourage selecting new plant breeds based on the characteristics of group selection, a phenomenon which is only rarely observed in nature.

Much plant breeding and especially genetic engineering is aimed at creating "better" plants, e.g. plants with more effective photosynthesis or that grow faster. According to evolutionary thinking, these efforts are not likely to succeed, because natural selection has been optimizing these attributes for millions of years. 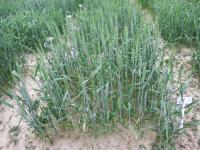