thaca, NY--In nature, as in life, there's often more than one way to solve a problem. That includes the evolutionary process. A new study in Evolution Letters finds that different bird species in the same challenging environment--the highly saline ecosystem of tidal marshes along ocean shores--were able to evolve unique species-specific ways to address the same problem.

"For tidal saltmarsh species, the challenge is how to maintain the right balance between water and salt concentrations in their cells," explains lead author Jennifer Walsh, a postdoctoral researcher at the Cornell Lab of Ornithology. "When cells are exposed to salt water, they shrink. If they're exposed to too much fresh water, they expand. Without the right balance, the cells can die."

Walsh and colleagues from eight other universities studied the genomes of four sparrow species: Savannah, Nelson's, Song, and Swamp Sparrow. These were chosen because each of these species has a population living in saltmarsh habitat as well as a separate upland population. This makes it possible to compare the genomes of the two populations and see where they differ. Some of those differences are tied to adaptations evolved in saltmarsh-resident sparrows to control the balance of water and salt concentrations--a process called osmoregulation.

One gene that appears to be important in Savannah Sparrows plays a role in inserting physical channels in the cells. Those channels help the cells resist expansion and contraction from changes in salt levels by allowing exchange of water across the cell wall. Swamp Sparrows show a similar response to salt water, but the genes responsible for forming these channels are completely different. Song Sparrows seem to have adapted through mechanisms that reinforce cell walls so they can expand and contact more quickly in response to salt. The Nelson's Sparrow takes yet another route--evolving a gene that changes its behavior. Their genetic adaption curbs thirst so they only drink the least amount of salt water necessary and salt levels are kept within bounds. The four sparrow species evolved four different, complex mechanisms to deal with salt, each likely governed by many genes working in tandem.

The researchers also found that the osmoregulatory adaptations evolved at a rapid pace, at least on an evolutionary scale--probably over the past 10,000 to 15,000 years--and that New World sparrows have colonized marshes over and over again.

The saltmarsh sparrows also evolved some shared traits across species that may help them survive the hot, salty, harsh conditions of their environment: a larger bill to better dissipate heat, a modified kidney structure, and darker plumage which may provide some UV protection and help feathers withstand abrasive vegetation. But why live in a saltmarsh at all?

"Sometimes birds move into marshes because, if you can adapt to the environment, it's actually a pretty good place to be," Walsh says. "There's no competition because so few species live there, and there is never, ever a shortage of insects for food." 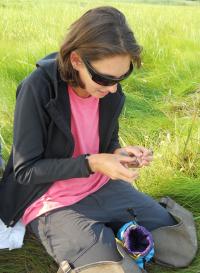