Cambridge, MA - Disruptive, transformative technologies are being introduced at an accelerating pace, fuelling opposition that impedes forms of innovation needed to meet profound challenges such as climate change, poverty and world hunger, says a new study from Harvard University.

Innovation and Its Enemies: Why People Resist New Technology, by Prof. Calestous Juma of the Harvard Kennedy School's Belfer Center for Science and International Affairs, chronicles the history of opposition to change -- from tractors and certain uses of the printing press to coffee and margarine -- and its underlying reasons.

Such understanding is critical, he argues, to the successful introduction and adoption of technological innovations needed to cope with humanity's most serious economic and environmental challenges.

Published as a book by Oxford University Press, the 16-year study says fear and perceptions of lost employment, identity, and power drive impediment to innovation, and describes the widening gap between the pace of technological advancement and slow rate at which society adjusts.

Says Dr. Juma:"To meet the needs of a growing world population on a warming planet, humanity's hopes are pinned on the introduction of transformative technologies but progress can be impeded by unreasonable obstruction to change."

The study acknowledges the need to address legitimate health and environmental concerns related to new products and technologies and underlines that transparency, inclusiveness and caution in the handling of scientific uncertainty as critical elements of public trust.

The study chronicles the extraordinary measures taken by opponents to change, and the tenacity of entrepreneurs and technologists who overcame it.

Drawing on nearly 600 years of controversies, the study presents in-depth case studies of opposition to innovation, including printing of the Koran by the Ottomans, alternating current, refrigeration, recorded music, and, more recently, robotics, artificial intelligence and agricultural biotechnology.

Both coffee and tractors, for instance, were the targets of smear campaigns. Other tactics included demonization, rumours, slander, efforts to restrict use through legislation, and outright bans.

Parallels through history are striking. Transgenic crops have been dubbed "Frankenfoods." In 17th century Italy, coffee was called "Satan's Drink" and "Junior Alcohol" in 20th century southern India. In England, France, and Germany, coffee was said to cause sterility.

Calling refrigerated products "Embalmed Foods" had a chilling effect on consumers. Swedes dubbed the early telephone the "Devil's Instrument." Margarine was derided as "Bull Butter" in America and accused of causing sterility, male baldness, and stunting.

"Common to all these cases is fear and opponents excluded from the benefits of new technology," says Dr. Juma.

Launch of the study takes place Wednesday July 6 at the 16th International Joseph A. Schumpeter Society Conference in Montreal. Dr. Schumpeter, an early 20th Century Austrian economist introduced the idea of "creative destruction" and was equally concerned about resistance to change.

The study says that in many cases objections and social responses to innovation fall into in one or more of four categories: intuition, vested interests, intellectual arguments, and psychological factors.

Innovation and Its Enemies advocates more timely scientific assessments of the benefits and risks of new technologies, swift adjustment of social institutions to keep pace with technological advancement, and greater public awareness and citizen engagement.

This entails greater involvement of public institutions to provide training in the emerging fields, creation of joint ventures, equitable management of intellectual property rights, segmentation of markets to enable a technology to be used for noncompetitive products, and improvement of the policy environment to support long-term technology partnerships.

Also needed: strong, entrepreneurial decision-makers and leaders who can use available knowledge to assess a situation, take informed executive action in a timely manner, and monitor technological advances and their impacts. Leaders must be able to rely on advice from both scientific academies as well as complementary advisory institutions in executive offices.

Finally, says Dr. Juma, public education is critical in determining the pace and patterns of technological adoption. Many programs alienate the public by assuming that the root cause of social concern over new technology is ignorance. To the contrary, concerns commonly come from well-informed sections of the population. Public education should aim to enhance the legitimacy and quality of risk assessment processes. Ultimately, the goal is to manage risk perception and foster trust.

"People are more likely to accept the risks of new technologies if they have been part of the process of deciding on their use," says Dr. Juma.

Calestous Juma is Professor of the Practice of International Development at Harvard Kennedy School's Belfer Center for Science and International Affairs. He directs the School's Science, Technology, and Globalization Project. He is author of The New Harvest: Agricultural Innovation in Africa (Oxford University Press, 2011, 2015). His next book is tentatively entitled How Economies Succeed: Technology, Innovation, and Entrepreneurship. Twitter @Calestous

Comments on the study

"It takes one of the leading lights on innovation -- Calestous Juma -- to truly understand the forces that oppose it. Just as technologic change is reaching peak velocity, this extraordinary work provides a systematic, scholarly, and surgical dissection of what can hold us back."

Professor Eric Topol, MD, Director of the Scripps Translational Science Institute, La Jolla, California, and author of The Patient Will See You Now

"Innovation and its Enemies is a wonderful read. The style is lucid. The tone is lively. Professor Juma examines why people resist innovation, and argues that controversies result from the tension between the need to innovate and the pressure to maintain order. Although he discusses a profound socio-historical issue, his titles are very creative and eye-catching, and his use of case studies from history brings the information closer to the general reader. This is truly a great book and a fascinating read!"

"A must read to anyone holding public office. Having overcome obstacles as president of the Dominican Republic in building the metro system of Santo Domingo, I found in Professor Calestous Juma's book useful theoretical insights into the understanding of why resistance occurs when introducing innovation in the public sphere."

"An insightful book that addresses one of the paradoxes of our time, namely why generations that have benefited so much from innovation are so resistant to it. Drawing on a fascinating diversity of historical examples--coffee, electricity, refrigeration, farm mechanization, genetic modification--Professor Juma discusses how innovation occurs, the role of experts and why skepticism and confusion are often inevitable. A must-read for everyone involved in technology development and policy."

"An outstanding treatise on how new technologies are created and why they are so often not initially accepted by society. Innovation and Its Enemies is filled with wonderful stories that go through innovations ranging from cell phones to coffee to the light bulb. I loved reading it."

"Calestous Juma's book provides a very enjoyable insight into the attitudes of society and individuals to innovation over the centuries. It's highly accessible style provides the reader with great historical nuggets arising from the introduction of coffee and printing through to reactions invoked when margarine and transgenic crops were launched. The conclusions are supported by amazing facts and details."

"We all know how difficult it can be to accept truly revolutionary innovations. Professor Juma illustrates the difficulties faced by the innovators with a few case histories and provides some guidelines for avoiding many of the difficulties. One strong lesson is that engaging with the consumers, usually the general public, at an early stage is a very good idea. Another clear lesson is that different stakeholders react very differently to innovation, especially when it seems it might seriously disrupt existing businesses or traditional social structures. A must read for anyone who wishes to engage in such disruption themselves."

"This is a good read and an invaluable reference work for those working on new technologies, especially those needed to meet the grand challenges of the 21st century. Calestous Juma's detailed analysis of how innovations have been accepted or resisted is complete and fascinating. Many view resistance to advances such as GM foods and mobile phones as a modern phenomenon related to recent advances in science. Calestous explains that innovations have in fact been resisted for centuries but goes on to explain how this resistance can, and has been, overcome."

"Calestous Juma's Innovations and Its Enemies is a great read that uniquely outlines the history of society resisting new technologies and innovative ideas that caused social and economic distribution. We have dwindling resources on our planet and continue to do irrevocable harm to our climate. Add the ever growing population demanding the benefits of wealth including health and food excess and it is clear we are heading for disaster. Rapidly evolving scientific advances are labeled as disruptive because they might radically alter the production of food, chemicals, pharmaceuticals, fuel, into much more sustainable processes which will clearly require social change. Appling new genomic science can shift medicine to a preventative life and cost saving enterprise and computer-based knowledge can lead to democratization but not without social disruptions. Juma discusses how laws, business and social institutions and scientific communication need to adapt as 'the risk of doing nothing may outweigh the risks of innovating.'" 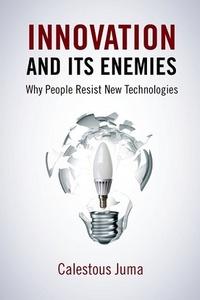 Innovation and Its Enemies: Why People Resist New Technology