Osaka, Japan - Researchers at Osaka University used electron cryomicroscopy (CryoEM) to image essential cardiac muscle components, known as thin filaments, with unprecedented resolution. They also discovered the mechanism by which these filaments regulate heart beat via cardiac muscle contractions in the presence or absence of calcium ions by changing their conformations. This work may have application in the development of new drugs for treating heart conditions caused by mutations that affect these structures and functions.

The human heart is a remarkable organ, capable of pumping blood for a lifetime without rest. However, many of the details of its inner workings remain unknown, partly because the exact structures of its muscle proteins in their natural forms are difficult to image. This is especially true for "thin filaments" - tiny filamentous structures made up of proteins called actin, troponin, and tropomyosin - owing to their complex interactions and small size. It has long been known that cardiac muscle contraction is controlled by the repeated increase and decrease in the concentration of calcium ions within muscle cells and that the control of contraction is accomplished by changes in the structure of the thin filaments when these ions bind to them. However, the exact mechanism was unclear.

Now, by using CryoEM, a technique recognized with the 2017 Nobel Prize in Chemistry, researchers at Osaka University have revealed the highest-resolution structural images of these proteins to date. Conventional electron microscopy usually damages fragile biological samples, meaning that their native shape in the body cannot be determined. In contrast, by the cryoEM technique, samples are flash-frozen so that proteins can be imaged while still in their native conformations.

"It has been very difficult to reveal the entire structure of the thin filament, but we succeeded in solving its structure using cryoEM and advanced image analysis," says first author Yurika Yamada. The Osaka team demonstrated how, in the absence of calcium ions, myosin access to the actin regions are blocked so that myosin heads cannot attach to them for muscle contraction. However, the binding of calcium ion changes the conformation of the thin filaments, exposing the attachment sites for contraction.

"Since many mutations in the component proteins of the thin filament are known to cause heart disease, including cardiac hypertrophy and cardiomyopathy, the revealed structures could provide a molecular and structural basis for novel drug design," explain senior authors Takashi Fujii and Keiichi Namba.

This research also highlights the power of cryoEM to reveal previously unseen anatomical detail with potential for yet unimagined medical breakthroughs.

Getting to the heart of heart beats: Cardiac thin filament structure and function revealed 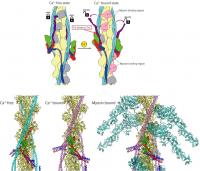