Typhoon Hagupit continues to intensify as it continued moving through Micronesia on Dec. 3 triggering warnings. NASA's Aqua satellite passed overhead and captured an image of the strengthening storm while the Rapidscat instrument aboard the International Space Station provided information about the storm's winds.

The International Space Station-RapidScat instrument monitors ocean winds to provide essential measurements used in weather predictions, including hurricanes. "RapidScat measures wind speed and direction over the ocean surface and captured an image of Hagupit when it was a tropical storm on Dec 2 at 8:50 a.m. GMT," said Doug Tyler of NASA's Jet Propulsion Laboratory, Pasadena, California. "The growing storm, north of New Guinea and headed for the Philippines, already had 25 meters/second winds (50 knots/57.5 mph/92.6 kph)."

NASA's Aqua satellite captured a visible image of Typhoon Hagupit on Dec. 3 at 04:30 UTC (Dec. 2 at 11:30 p.m. EST) as it moved through Micronesia in the western Pacific Ocean. The image showed a concentration of strong thunderstorms around the center with bands of thunderstorms spiraling into it.

Forecasters at the Joint Typhoon Warning Center (JTWC) expect that Hagupit will continue to move west-northwest through Micronesia while intensifying to a Category four typhoon on the Saffir-Simpson scale peaking at 130 knots (149.6 mph/240 kph) over the next two days before it starts to weaken. The JTWC forecast calls for the typhoon to turn to the northwest and stay to the east of the Philippines. 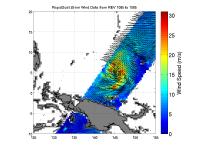