BALTIMORE. The Mid-Atlantic Regional Council on the Ocean (MARCO) has recently adopted a Course of Action to consider and develop recommendations to strengthen federal protection of submarine canyon habitats. MARCO's recommendations to federal agencies will be based on synthesis of existing data.

A number of submarine canyons exist along the continental shelf edge in the Mid-Atlantic region. Current data suggest these canyons support unique, highly diverse, and vulnerable habitats. More documentation and exploration is underway to refine and expand our understanding of these important offshore areas.

To gain clarity on the exceptional ecological and significant economic importance of the submarine canyons, MARCO assembled regional science experts and explorers in Baltimore on Friday, September 12 as a part of the Star-Spangled Spectacular in the Inner Harbor.

MARCO's development of the course of action also coincides with the launch of a federally funded expedition to explore several submarine canyons. From September 4 to October 7, 2014, the NOAA Ship Okeanos Explorer is exploring the largely unknown deep-sea ecosystems of the U.S. Atlantic coast with a special emphasis on the canyon structures. Earlier this year, MARCO provided a list of priority canyons for exploration to the Okeanos team, helping to guide the scientific direction of the expedition.

The full Course of Action Statement can be found at: http://midatlanticocean.org/wp-content/uploads/2014/09/MARCO.Submarine-Canyons.2014.09.12.pdf

Information on the Okeanos Explorer 2014 Atlantic Canyons Expedition may be accessed at: http://oceanexplorer.noaa.gov/okeanos/explorations/ex1404/welcome.html

This release is available on the MARCO website at: http://midatlanticocean.org/marco-releases-course-of-action-convenes-experts-to-discuss-deep-sea-canyon-science/

Summary of Course of Action Statement

To advance its shared goal of ensuring that key ocean habitats of the Mid-Atlantic are protected from the principal activities effects that threaten their sensitive and unique features, biological populations, and ecological processes, MARCO intends to work in partnership with researchers, Federal agencies and stakeholders to:

Established by the Governors of the five coastal Mid-Atlantic states (Delaware, Maryland, New Jersey, New York, and Virginia) in 2009, the Mid-Atlantic Regional Council on the Ocean (MARCO) is a partnership to address shared regional priorities and provide a collective voice for the region. The five MARCO states focus on four-shared priority areas identified in the Governors Agreement: climate change adaptation, marine habitats, offshore renewable energy and water quality. MARCO also uses regional ocean planning as a means to advance these priorities.

Mid-Atlantic Regional Council on the Ocean 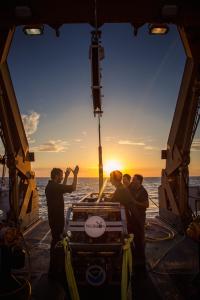 Scientists prepare for a Dive