A collaborative team of scientists from the US and Australia has named a new plant species from the remote Outback. Bucknell University biology postdoctoral fellow Angela McDonnell and professor Chris Martine led the description of the plant that had confounded field biologists for decades because of the unusual fluidity of its flower form. The discovery, published in the open access journal PhytoKeys, offers a powerful example of the diversity of sexual forms found among plants.

The new species of bush tomato discovered in remote Australia provides a compelling example of the fact that sexuality among Earth's living creatures is far more diverse - and interesting - than many people likely realize.

Bucknell University postdoctoral fellow Angela McDonnell and biology professor Chris Martine led the study following an expedition last year to relocate populations of the new plant, which were first noted by Australian botanists during the 1970s.

Herbarium specimens from those few earlier collections are peppered with notes regarding the challenge of identifying the sexual condition of this plant, which appeared at various times to be female, male, or bisexual.

According to Martine, about 85% of the planet's quarter-million flowering plant species have flowers that are bisexual - with both male and female organs present in every blossom.

"So that's already quite different than what some people might expect; but the remaining 15% or so come in all sorts of forms that push the envelope further, including unisexual flowers and (like we see in a plant like Cannabis) whole plants that are either male or female."

"For the most part, a given plant species will stick to one primary and predictable type of sexual expression," said Martine "but what makes Solanum plastisexum stand out is that it is one of a just a few plants that kind of do it all. It really seems like you never know what you'll get when you come across it."

When DNA studies in Martine's lab offered proof that these plants were not only all the same thing, but a species not yet described, he, McDonnell, Jason Cantley (San Francisco State University), and Peter Jobson (Northern Territory Herbarium in Alice Springs) set out to hunt for populations along the unpaved Buchanan Highway in the remote northwestern region of the Northern Territory.

The botanists were able to collect numerous new specimens and have now published the new species description in the open-access journal PhytoKeys, choosing the name Solanum plastisexum as a nod to the notable variation exhibited by this plant in its sexual condition.

"This name, for us, is not just a reflection of the diversity of sexual forms seen in this species," wrote the authors in the article. "It is also a recognition that this plant is a model for the sort of sexual fluidity that is present across the Plant Kingdom - where just about any sort of reproductive form one can imagine (within the constraints of plant development) is present."

Also known as the Dungowan bush tomato, Solanum plastisexum is a distant cousin of the cultivated eggplant and is a close relative of two other Australian species recently discovered by Martine and colleagues that were also published in PhytoKeys: Solanum watneyi, named for Mark Watney, the space botanist of the book/film The Martian; and Solanum jobsonii, a species named last year for S. plastisexum co-author Jobson.

The scientists hope that the naming of this latest new species turns a spotlight on the fact that nature is full of examples for the myriad ways in which living things behave sexually.

"In a way, S. plastisexum is not just a model for the diversity of sexual/reproductive form seen among plants - it is also evidence that attempts to recognize a "normative" sexual condition among the planet's living creatures is problematic."

"When considering the scope of life on Earth," the authors conclude, "The notion of a constant sexual binary consisting of two distinct and disconnected forms is, fundamentally, a fallacy."

Bucknell sophomore Heather Wetreich, who measured and analyzed the physical characters of the new species using plants grown from seed in a campus greenhouse, joins McDonnell, Cantley, Jobson, and Martine as a co-author on the publication. 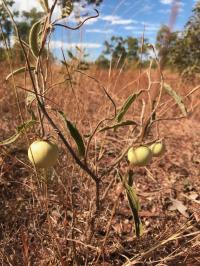