Who doesn't love an upgrade? Newer, better and oh so shiny is great, but what's really fantastic is when a change unlocks new possibilities. That's the case with NASA's fix-it investigation on the International Space Station, the Robotic Refueling Mission (RRM). The award-winning endeavor moved one step closer to its 2.0 update with the delivery of new RRM hardware aboard the European Automated Transfer Vehicle-5, which docked with the space station today. The RRM module, affixed to an exterior space station platform since 2011, now awaits the robotic transfer of two new task boards and a borescope inspection tool that will equip RRM for a new round of satellite-servicing demonstrations.

"The Robotic Refueling Mission is about to get a refresh, and we couldn't be more excited," explains Benjamin Reed, deputy project manager of the Satellite Servicing Capabilities Office, the team responsible for RRM's development and operations on orbit.

"This is the beauty of doing research on the space station. We're not tied to the original hardware complement we sent up three years ago. The cadence of space station supply flights gives us the opportunity to swap equipment so we can tackle a new set of technology demonstrations."

Since 2011, the duo of RRM and Dextre--the Canadian Space Agency robot that acts as a "handyman" for external station activities--has been steadily evaluating a set of NASA-developed, game-changing technologies that would enable remotely controlled robots to eventually repair and service spacecraft in orbit. The overarching challenge facing the NASA RRM team is devising and manufacturing new robotic, teleoperated tools and techniques to service spacecraft that were not designed for in-flight service.

Robotic refueling and the tasks accompanying it - including blanket cutting, wire cutting and cap and fastener removal - were the primary focus of RRM's first set of technology demonstrations.

In its second phase of activities, RRM will move past its refueling roots to test out the inspection capabilities of a new space tool named VIPIR, the Visual Inspection Poseable Invertebrate Robot. The team will also tackle the intermediary steps leading toward spacecraft cryogen replenishment and host a demonstration of next-generation solar cell technology and a carbon nanotube experiment.

"The common thread is building up NASA's collection of enabling satellite-servicing capabilities," says Reed. "Every capability translates into another option a satellite owner could potentially choose to keep his or her satellite operating longer and performing optimally."

Longer-living spacecraft would in turn translate into extended services for people on Earth who rely on these satellites for timely, accurate data. "Satellites are the unseen powerhouses that quietly generate and move the data we rely on every day of our lives: weather reports, satellite television, GPS and communications support," explained Reed.

The newly delivered RRM hardware, consisting of a task board and the VIPIR tool, joins two other pieces that were delivered to space station in August 2013 by a Japanese cargo vehicle. The space station crew will stow these new RRM components inside the orbiting research center until the team can use Dextre to transfer and install them robotically on the RRM module. This transfer and the subsequent RRM-Phase 2 operations are being scheduled. 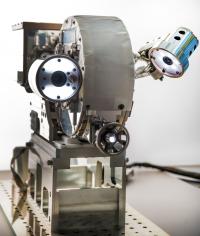