Asian honey bees (Apis cerana) collect animal feces and carefully arrange it around their nest entrances to deter the attacks of giant hornets, according to a study by Heather Mattila at Wellesley College in Massachusetts and an international team of researchers, publishing December 9 in the open-access journal PLOS ONE.

Honey bees have evolved a variety of strategies to deflect attacks by heavily armored predators like hornets, including synchronized visual displays, hissing, or enveloping intruders in a ball of bees until they overheat. Now, researchers have discovered a new tool in their defensive arsenal - animal feces.

Giant hornets such as Vespa soror are voracious predators that launch group attacks on honey bee colonies, killing thousands of worker bees and eventually taking over the nest and killing defenseless brood. In observational experiments of three apiaries in Vietnam, the team found that honey bees collected small balls of animal dung, which they applied in spots around nest entrances in response to visits by V. soror, but not in response to visits from a smaller hornet species (Vespa velutina) that does not perform mass attacks. They also found that colonies exposed to secretions from the glands that giant hornets use to mark for nests for attack had more fecal spots around their nest entrance after 6 hours than colonies exposed to a control. Hornets were less likely to land on nest entrances with large numbers of fecal spots, and they spent 94% less time chewing at the entrance if they did land, suggesting this unusual behavior may play a protective role by preventing nest takeover.

This study is the first documented case of honey bees collecting non-plant matter, and the first clear example of honey bee tool use. The authors suggest that animal feces may contain compounds that deter hornets, or it might mask the chemical markers they use to target colonies for a mass attack.

The authors add: "The use of animal feces by Asian honey bees showcases the impressive suite of weapons they have evolved to defend their colonies against one of their most dangerous predators. It also highlights the reasons why European honey bees, which don't have these defenses, succumb to giant hornets so easily when they are introduced into each other's range."

Funding: Funding for this study was provided by the National Geographic Society Committee for Research and Exploration (grant number 9338-13; to GWO, HRM, LTPN, HDP), the Vietnam Academy of Science and Technology (grant number KHCBSS.01/18-20; to LTPN), and Wellesley College (Knafel Chair in the Natural Sciences, the Science Center Summer Research Program, and a Faculty Award for open-access publication; to HRM). The funders had no role in study design, data collection and analysis, decision to publish, or preparation of the manuscript.

In your coverage please use this URL to provide access to the freely available article in PLOS ONE: https://journals.plos.org/plosone/article?id=10.1371/journal.pone.0242668 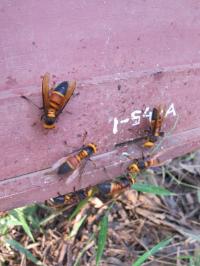