RapidScat is a scatterometer instrument that flies aboard the International Space Station. It measures surface wind speeds and direction over open waters of oceans. On May 26 at 0100 UTC (May 25 at 9 p.m. EDT) RapidScat saw strongest sustained surface winds northeast of the center in System 91L, the developing tropical cyclone, at a rate near 21 meters per second (46.9 mph/75.6 kph). Images from RapidScat data are made into images at NASA's Jet Propulsion Laboratory in Pasadena, California where the mission is managed.

At 7:45 a.m. EDT on Friday, May 27, 2016, the National Hurricane Center (NHC) noted that the shower activity was showing signs of organization, and the circulation had become a little better defined overnight. NHC noted "Environmental conditions are generally conducive for a tropical or subtropical cyclone to form later today or Saturday while this system moves west-northwestward to northwestward toward the southeastern United States coast.

NOAA's GOES-East satellite captured a daytime (visible) view of developing System 91L between the Bahamas and Bermuda on Friday, May 27 at 1430 UTC (10:30 a.m. EDT). The image showed the circulation of the low with thunderstorms wrapping around from the northern to the southeastern quadrant. NOAA manages the GOES-East satellite and the NASA/NOAA GOES Project at NASA's Goddard Space Flight Center in Greenbelt, Maryland uses the satellite data to create images and animations.

Over the Memorial Day weekend, the NHC cautioned that all interests along the southeast coast from Georgia through North Carolina should monitor the progress of this low pressure area.

NHC noted that System 91L has a high chance, 90 percent, of becoming a tropical depression. When it does it would be designated Tropical Depression 2, since the first depression of the season actually formed in January and grew into Hurricane Alex. If System 91L strengthens enough to become a tropical storm, it would be named Bonnie. 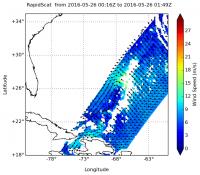