Immune system cells known as cytotoxic T cells attack blood vessels and cause fatal swelling in the brains of mice with a condition that mirrors a severe complication of malaria in humans. These are the findings of a new study published in PLOS Pathogens.

After contracting malaria, some people develop a complication known as cerebral malaria, which causes brain swelling and bleeding. Cerebral malaria kills 15 to 30 percent of the people it afflicts, but the mechanisms that cause the disease are not completely understood.

To help clarify the causes of cerebral malaria, Dr. Phillip Swanson of the National Institutes of Health, Maryland, and colleagues peered into the brains of mice infected with a parasite that causes a similar fatal condition. They used a technique called intravital microscopy to capture movies of immune cell activity in the living mouse brain as the disease progressed.

The research revealed that cytotoxic T cells aggregated along blood vessels in the diseased mouse brain, interacting with tiny parasite fragments presented by the vessels. These interactions were directly associated with vascular leakage. The leaking blood vessels caused the brain to swell, and the resulting pressure killed neurons that keep the heart and lung functioning.

When the scientists injected the mice with antibodies that prevented T cells from sticking to blood vessels, the fatal swelling was prevented. This confirmed that T cells play a major role in causing the mouse version of cerebral malaria. It also suggests potential new treatment strategies, should further research confirm that a similar mechanism is responsible for cerebral malaria in humans.

"By watching immune cells function in the living brain during cerebral malaria, the investigators of this study revealed that parasite-specific CD8 T cells attack the wall of the cerebral blood vessels, causing excessive swelling and damage to a vital brain center. This fatal disorder can be prevented by therapeutically displacing the pathogenic T cells from the vessel wall."

In your coverage please use this URL to provide access to the freely available article in PLOS Pathogens: http://journals.plos.org/plospathogens/article?id=10.1371/journal.ppat.1006022

Funding: This research was supported by the intramural program at the National Institutes of Health. The funders had no role in study design, data collection and analysis, decision to publish, or preparation of the manuscript. 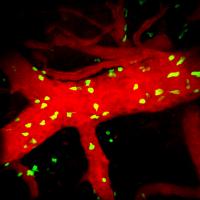