A new study by Rice University Earth scientists asserts: Without a rapid and dramatic reduction of greenhouse gas emissions, fragile coral reefs in the Gulf of Mexico, like those around the world, face catastrophe.

That could be bad for us all, said Sylvia Dee, a Rice assistant professor of Earth, environmental and planetary sciences. She and colleagues from Rice, the University of Texas at Austin and Louisiana State University drew their evidence from an extensive analysis of stressors on corals that line the Gulf coast.

They found the majority of shallow reefs along the coast from Texas to Florida are in poor-to-fair condition, and the predicted rise in surface temperatures and ocean acidity will severely degrade what's left by the end of the century.

The sheer speed of those changes will hamper, if not prevent, the recovery of reefs, some of which began to evolve in the gulf 420,000 years ago, Dee said.

"Part of this paper addresses whether or not reefs are adaptable to the warming temperatures and increasingly acidic oceans," said Dee, whose climate model projections were compared to years of data collected by the government and environmental scientists. "We looked for clues from periods in the past that might suggest present-day reefs have the ability to cope with heating and adapt or regenerate.

"But there's limited evidence to suggest that the adaptation could occur fast enough compared to how quickly we're warming the oceans," she said. "Millions of years ago, rates of sea surface temperature change and ocean acidification, such as those we're experiencing now, would have happened over much longer time scales."

The team's open-access study appears in an edition of Frontiers in Marine Science dedicated to the past, present and future of Gulf of Mexico reefs. The edition was inspired by an October 2018 Rice symposium on the topic organized by Adrienne Correa, an assistant professor of biosciences whose paper on gene expression of endangered coral also appears in the edition.

Most research on climate change and coral reefs to date has focused on the Great Barrier Reef and the tropical Pacific, she said. "Things are going south at a rapid rate there," Dee said. "But Gulf of Mexico reefs are also being swiftly degraded, and there hadn't been a comprehensive paper looking at the gulf alone."

The researchers noted that coral reefs support the world's fisheries, protect coastlines and promote tourism, generating billions of dollars for the global economy each year. According to one study, they support more than 70,000 jobs in southeast Florida alone.

In line with recent, dramatic reports by the Intergovernmental Panel on Climate Change and the United Nations, the researchers found that even hitting the emission targets called for by the Paris Agreement, which aim to keep global temperatures from rising more than 1.5 degrees Celsius, may not be sufficient to preserve the reefs.

Their climate model uses a benchmark known as Representative Concentration Pathways, which describes the future amount of radiative forcing, the balance between energy absorbed by the Earth from sunlight and that radiated back to space. The study assumed a forcing imbalance of +8.5 watts per square meter as the baseline for future warming. However, future greenhouse gas emissions have a direct impact on this number, which the researchers considered conservative, as it takes into account emissions measured over the past few decades.

"We used, essentially, a worst-case scenario for how humans will behave," Dee said. "But we explored both medium-range -- or medium climate change abatement -- and worst-case scenarios. Unfortunately, no matter the scenario, heating rates are high enough that we would expect almost complete coral bleaching throughout the Gulf of Mexico."

Coral bleaching refers to the expulsion of symbiotic algae that live inside coral tissues. Corals draw most of their energy from algae and begin to starve when it disappears due to rising temperatures. Sea life depends on the reef for shelter and sustenance and coral banks are a natural physical barrier that help protect coastlines by reducing erosion from wave action and storm surge.

"The best-case scenario is that we have rapid and widespread reduction of greenhouse gas emissions in the near term, the next 20 years," she said. "The corals in the Gulf of Mexico are hardy. Some survived Hurricane Mitch, and other gulf reefs have survived catastrophic, short-lived events. The concern is that if the heating gets worse every single year, it's going to be close to impossible for the corals to bounce back."

Co-author Mark Torres, an assistant professor of Earth, environmental and planetary sciences at Rice, noted models showed the secondary effects of ocean acidification may not be as dire as rapid temperature rise, but would still challenge the reefs' ability to recover.

"Corals make their skeletons around calcium carbonate," he said. "If seawater becomes so corrosive that skeletons dissolve in it, there's no adapting around that."

"Think of it like putting a tooth in a Coke can," Dee added.

Corals thrive along a narrow range of coastal shelf, so their ability to migrate to more hospitable waters is limited, Torres said. "If they grow deeper, the water is colder, but then they're further away from the light," he said. "There are physical limits to how deep they can live."

The researchers noted corals could give way to other species, like sponges, over the long term, but can't predict how that would impact the overall coral reef environment.

"Corals are the foundation of ecosystem health for most marine species," Dee said. "If the corals go away, you lose the fish, you lose everything. When we started evaluating climate model simulations for the future, we didn't know that the conditions in the Gulf of Mexico were going to be so dire."

Co-authors of the paper are Rowan Martindale, an assistant professor of geosciences, and graduate student Anna Weiss of the University of Texas at Austin, and Kristine DeLong, an associate professor of geography and anthropology at Louisiana State University.

This news release can be found online at https://news.rice.edu/2019/12/05/gulf-coast-corals-face-catastrophe/

Gulf of Mexico coral reefs may only be saved by a dramatic reduction in greenhouse gas emissions beyond those called for in the Paris Agreement, according to Rice University-led research. Here, members of co-author Kristine DeLong's lab drill into coral reefs to extract samples on Dry Tortugas in the Florida Keys. (Credit: Courtesy of Kristine DeLong, Louisiana State University)

Gulf of Mexico coral reefs may only be saved by a dramatic reduction in greenhouse gas emissions beyond those called for in the Paris Agreement, according to Rice University-led research. Here, co-author Kristine DeLong and a colleague stand behind a fossilized coral reef boulder dating back to the last interglacial that washed ashore on Little Cayman. (Credit: Courtesy of Kristine DeLong, Louisiana State University)

Corals and sponges in the Flower Garden Banks National Marine Sanctuary. According to research led by Rice University, Gulf of Mexico coral reefs may only be saved by a dramatic reduction in greenhouse gas emissions beyond those called for in the Paris Agreement. (Credit: National Ocean Service Image Gallery) 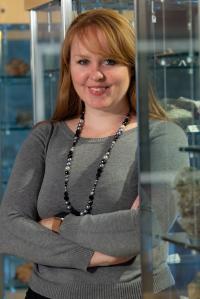