Scientists have discovered how earthworms can digest plant material, such as fallen leaves, that would defeat most other herbivores.

Earthworms are responsible for returning the carbon locked inside dead plant material back into the ground. They drag fallen leaves and other plant material down from the surface and eat them, enriching the soil, and they do this in spite of toxic chemicals produced by plants to deter herbivores.

The scientists, led by Dr Jake Bundy and Dr Manuel Liebeke from Imperial College London, have identified molecules in the earthworm gut that counteract the plant's natural defences and enable digestion. Their work is published today (4 August 2015) in Nature Communications and includes support from the Centre for Ecology and Hydrology, the University of Oxford, and Cardiff University.

The molecules, which have been named drilodefensins, are so abundant that Dr Liebeke estimates that for every person on earth there is at least 1kg of drilodefensins present within the earthworms that populate the world's soils. Their abundance is not, however, an excess - drilodefensins are so precious that earthworms recycle the molecules in order to harness their effects again.

A world without drilodefensins would be a very different world, according to the researchers. Dr Bundy, from the Department of Surgery and Cancer at Imperial, said: "Without drilodefensins, fallen leaves would remain on the surface of the ground for a very long time, building up to a thick layer. Our countryside would be unrecognisable, and the whole system of carbon cycling would be disrupted."

Plants make polyphenols, which act as antioxidants and give the plants their colour; they also inhibit the digestion of many herbivores. Earthworms, however, are able to digest fallen leaves and other plant material, thanks to the ability of drilodefensins to counteract polyphenols. Dr Bundy and his team found that the more polyphenols present in the earthworm diet, the more drilodefensins they produce in their guts.

The finding that the molecules are abundant in the gut of earthworms was made possible by using modern visualization techniques based on mass spectrometry (MALDI imaging). Dr Liebeke , formerly of the Department of Surgery and Cancer at Imperial, and now working at the Max Planck Institute for Marine Microbiology, in Germany, said: "Using these molecular microscopes is changing how we understand complex biochemistry of living beings; we are now able to locate every molecule in, for example, an earthworm to a specific location. Knowing the location of a molecule can help us to figure out what it actually does."

The first record of a molecule that would now be considered a drilodefensin was in 1988 when a patent was filed for a molecule that was thought to dilate blood vessels. In traditional Chinese medicine, this molecule was ingested in the form of dried earthworm products. But Dr Bundy cautioned that the drying process would almost certainly render drilodefensins inactive.

Dr Dave Spurgeon of the Centre for Ecology and Hydrology is a co-author on the paper. He said: "We've established that earthworms, referred to as 'nature's ploughs' by Charles Darwin, have a metabolic coping mechanism to deal with a range of leaf litter diets. In this role, drilodefensin support the role of earthworm as key "ecosystem engineers" within the carbon cycle."

The research was funded by the UK's Natural Environment Research Council. 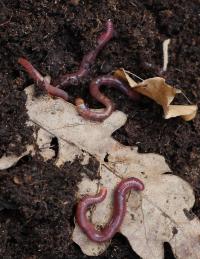 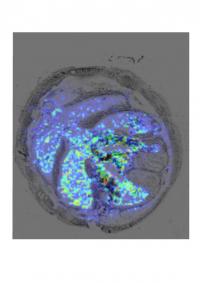