Although the non-tropical low pressure system in the North Atlantic has moved little during the past several hours it has become better defined with increasing organization of the associated thunderstorm activity. The low is located 230 miles south-southeast of North/South Carolina border.

Conditions are gradually becoming more conducive to its development to a subtropical cyclone within the next 24 to 48 hours. A reconnaissance aircraft is scheduled to fly over the storm and further in investigate it. 90L is expected to drift northward over the next few days. With the low out in the Atlantic, heavy rains are expected over the coast southeastern portion of the United States over the next several days. The chance of 90L forming into a Tropical Storm in the next 48 hours is 70 percent at present according to the National Hurricane Center.

Tropical disturbance in the North Atlantic likely to develop 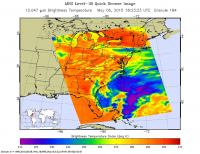