U.S. MILITARY ACADEMY, WEST POINT, N.Y.—How could a colorblind animal know how to change its skin color to blend into its surroundings? And what will the animal's predator "see," looking at its prey before and after it hides?

These provocative questions are addressed in article published today by a collaborative team from the Marine Biological Laboratory (MBL) in Woods Hole, Mass., and the U.S. Military Academy in West Point, N.Y. The article, "Hyperspectral imaging of cuttlefish camouflage indicates good color match in the eyes of fish predators," appears in Proceedings of the National Academy of Sciences (PNAS).

"What makes camouflage effective? The answer is that it's an opinion, and that opinion completely depends on who is being asked. Our work presented in this paper takes the field a step closer to quantifying camouflage effectiveness," says J. Kenneth Wickiser, Asst. Prof. in the Department of Chemistry and Life Science at the U.S. Military Academy in West Point.

Understanding the principles of camouflage is not only important in biology, but also provides insights into architecture, advertisement, and defense applications.

For this study, the team studied camouflage in the marine animals known as coleoid cephalopods (octopus, squid, and cuttlefish). Camouflage is the primary defense in these animals and their rapidly adaptable body patterning system is among the most sophisticated in the animal kingdom. The expression of camouflage body patterns in cuttlefish is a visually driven behavior. Previous studies have shown that certain background variables—such as brightness, contrast, edge and size of objects, etc.—are essential for eliciting camouflaged body patterns. However, cephalopod eyes lack color perception, thus the vexing question of how they achieve effective camouflage while being colorblind still remains.

Moreover, camouflage studies suffer from the inability to assess the effectiveness of camouflage in the visual space of predators; in short, it is difficult to determine whether a predator actually visually picks out the prey from the background environment. Knowledge of the visual capabilities of many predators is surprisingly lacking. Thus, the team asked, how does a colorblind animal change its color to blend into its surroundings, how do predators actually "see" their prey?

"To tackle this incredibly difficult problem, we put together a team with Chuan-Chin Chiao as a vision expert, Roger Hanlon and his scientists at the MBL as world leaders in cuttlefish and camouflage biology, and combined it with our expertise in hyperspectral imagery analysis at West Point," says Wickiser.

The team exploited a new imaging technology (HyperSpectral Imaging, HSI) to more accurately measure color match between animal and background, and to enable them to model camouflage in the eyes of predators. HSI employs a camera that captures not just 3 narrow windows (Red, Green, Blue – RGB) like human eyes or typical digital cameras do rather it captures the entire spectrum using 540 windows. In essence, HSI offers the opportunity to "see" things that humans, and many predators, cannot because of the limitations on our eyes. Because of the wealth of information HSI images provide, the scientists could extract a small amount of that data and compile an image from the perspective of a predator.

Importantly, modeling color vision of potential di- and tri-chromatic (RG or RGB capable) fish predators of cuttlefish corroborated the spectral match analysis and revealed that much of the contrast information (which allows a predator to "pick out" a cuttlefish from the background environment) resides in the brightness (luminance) rather than in the color (chromatic) aspect of the reflected light. What this means is that cuttlefish camouflage strategies take away a tool from predators in their ability to pick out their prey from the background and instead leave them with only brightness as a method for prey identification.

These findings (i) indicate the strong potential of HSI technology to evaluate camouflage body patterns simultaneously in the spatial and spectral domains, (ii) provide supporting evidence that cuttlefish can produce color-coordinated camouflage on natural substrates despite lacking color vision, and that (iii) the color aspect of cuttlefish camouflage is highly effective against fish predators. This is the first time that color matching in camouflaged animals has been visualized more realistically through the eyes of their potential predators.

"So much is unknown about how predators actually see their prey. Using hyperspectral imagery tools is a huge advance in getting us the information we need to model predator vision," says Wickiser. "We hope our work takes us one step closer to understanding how a colorblind animal adopts near-perfect camouflage in a variety of backgrounds."

The color-changing abilities of cephalopods have been appreciated since Aristotle's time. Although this topic has received much attention in the past, no quantitative assessment has been made to examine the color match between animal and background. Applying hyperspectral imaging system and modeling the predator's visual system adds a new dimension to quantifying animal camouflage in the eyes of the beholders. The team's findings provide strong support that cuttlefish are capable of hiding in plain sight of their visual predators. Furthermore, this approach may prove to be tranformational in the way that color is quantified in sensory studies of camouflage and signaling in the natural world.

The U.S. Military Academy is a four-year co-educational federal undergraduate liberal arts college located 50 miles north of New York City. Founded in 1802 as America's first college of engineering, it consistently ranks as one of the top colleges in the nation. A pre-eminent leader development institution, its mission remains constant - to educate, train and inspire cadets for careers of professional service to the Army and the nation. For more information go to www.westpoint.edu.

The Marine Biological Laboratory (MBL) is dedicated to scientific discovery and improving the human condition through research and education in biology, biomedicine, and environmental science. Founded in 1888 in Woods Hole, Massachusetts, the MBL is an independent, nonprofit corporation.

How can a colorblind animal change its colors to blend into the background? 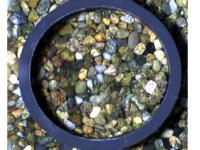