New York, NY (April 9, 2013)— New research has revealed that the use of Antimicrobial Copper surfaces in hospital rooms can reduce the number of healthcare-acquired infections (HAIs) by 58% as compared to patients treated in Intensive Care Units with non-copper touch surfaces. In the United States, 1 out of every 20 hospital patients develops an HAI, resulting in an estimated 100,000 deaths per year. Although numerous strategies have been developed to decrease these infections, Antimicrobial Copper is the only strategy that works continuously, has been scientifically proven to be effective and doesn't depend on human behavior, according to a recently published study in the SHEA Journal of Infection Control and Hospital Epidemiology.

"The implications of this study are critical," said Dr. Harold Michels, Senior Vice President of the Copper Development Association (CDA). "Until now, the only attempts to reduce HAIs have required hand hygiene, increased cleaning and patient screening, which don't necessarily stop the growth of these bacteria the way copper alloy surfaces do. We now know that copper is the game-changer: it has the potential to save lives."

The study, funded by the U.S. Department of Defense, was conducted in the Intensive Care Units (ICUs) of three major hospitals: The Medical University of South Carolina, Memorial Sloan-Kettering Cancer Center in New York City and the Ralph H. Johnson Veterans Affairs Medical Center in Charleston, South Carolina. To determine the impact of copper alloy surfaces on the rate of HAIs, copper-surfaced objects were placed in each ICU, where patients are at higher risk due to the severity of their illnesses, invasive procedures and frequent interaction with healthcare workers. Patients were randomly placed in available rooms with or without copper alloy surfaces, and the rates of HAIs were compared. A total of 650 patients and 16 rooms (8 copper and 8 standard) were studied between July 12, 2010 and June 14, 2011.

Results of this study, that appeared last July in the Journal of Clinical Microbiology, found that Antimicrobial Copper can continuously kill 83% of bacteria that cause HAIs within two hours, including strands resistant to antibiotics. The study compared copper to equivalent non-copper touch surfaces during active patient care between routine cleaning and sanitizing.

"Copper alloy surfaces offer an alternative way to reduce the increasing number of HAIs, without having to worry about changing healthcare worker behavior," said Dr. Michael Schmidt, Vice Chairman of Microbiology and Immunology at the Medical University of South Carolina and one of the authors of the study. "Because the antimicrobial effect is a continuous property of copper, the regrowth of deadly bacteria is significantly less on these surfaces, making a safer environment for hospital patients."

In study results, 46 patients developed an HAI, while 26 patients became colonized with MRSA or VRE. Overall, the proportion of patients who developed an HAI was significantly lower among those assigned to intensive care rooms with objects fabricated using copper alloys. There are currently hundreds of Antimicrobial Copper healthcare-related products available today, including IV poles, stretchers, tray tables and door hardware.

This study was so successful that an interdisciplinary team from UCLA began replicating this research in July 2012. The team is testing ICUs with Antimicrobial Copper at Ronald Reagan UCLA Medical Center.

About the Copper Development Association

The Copper Development Association Inc. is the market development, engineering and information services arm of the copper industry, chartered to enhance and expand markets for copper and its alloys in North America. Learn more on our blog. Follow us on Twitter.

Laboratory testing shows that, when cleaned regularly, Antimicrobial Copper surfaces kill greater than 99.9% of the following bacteria within 2 hours of exposure: MRSA, Vancomycin-Resistant Enterococcus faecalis (VRE), Staphylococcus aureus, Enterobacter aerogenes, Pseudomonas aeruginosa, and E. coli O157:H7. Antimicrobial Copper surfaces are a supplement to and not a substitute for standard infection control practices and have been shown to reduce microbial contamination, but do not necessarily prevent cross contamination; users must continue to follow all current infection control practices. Health claims related to clinical trials have not been approved or reviewed by the U.S. EPA. Because many factors contribute to the risk of infection, individual results may vary.

EPA approval for public health claims. In the U.S., after many years of research, the Environmental Protection Agency (EPA) has registered more than 400 copper based alloys, such as brass and bronze, as public health antimicrobial products. Antimicrobial Copper is the only metal registered by the EPA to continuously kill bacteria that cause infections and pose a risk to human health.

Copper is the active, microbe killing ingredient. Antimicrobial Copper isn't a coating or additive, and it isn't just pure copper. It's shorthand for a host of copper based metals (or alloys) that can go head-to-head with stainless steel in terms of strength, durability and aesthetics. In addition to their antimicrobial properties, copper alloys are: 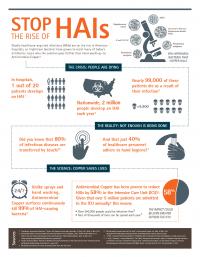 Stop The Rise of HAIs