A remote cave in Eastern Turkmenistan was found to shelter a marvelous cave-adapted inhabitant that turned out to represent a species and genus new to science. This new troglodyte is the first of its order from Central Asia and the first strictly subterranean terrestrial creature recorded in the country.

Kaptarhana cave is located at the foot of Koytendag Mountain, one of the most distinctive mountain landscapes in Central Asia. A curious amalgam of desert landscapes, often highly dissected by ravines, foothills with ridges, cuestas and fan plains, the mountain is a potential home to key biodiversity gems still awaiting discovery.

Also remarkable for its richness of caves and other limestone formations, Koytendag Mountain has more than 300 caves, sinkholes and potholes, hitherto registered from its territory, including the sixth largest cave system in Asia Gap Goutan/Promezdutachnaya stretched at more than 57 km underground. Also worthy of a mention is the beautiful cave Gulshirin, known for its snow white passages and extraordinary formations.

Another fine example, cave Kaptarhana, presents a unique habitat for a high number of cave-adapted animals, among which is the new species of a few millimetres long, pale and eyeless insect-like creature, whose relatives in the order Diplura also go by the name of two-pronged bristletails.

The scientists named it Turkmenocampa mirabilis, where the genus name (Turkmenocampa) refers to the creature's country of origin (Turkmenistan), while the species name (mirabilis) means "unusual, amazing, wonderful, remarkable" in Latin to highlight its unique morphology and position among its relatives.

In fact, Stoev and Sket were the first speleobiologists to visit and explore Kaptarhana in nearly 43 years. The survey was part of their study into the caves of Koytendag State Nature Reserve, Turkmenistan, conducted in 2015 and endorsed by a Memorandum of Understanding between the State Committee on Environment Protection and Land Resources of Turkmenistan and the Royal Society for the Protection of Birds.

To discover the new species, the scientists spent about 8 hours in the cave looking for specimens and placed pitfall traps with smelly cheese used as a bait. While visual observations had no success due to the cave being very spacious, a number of exemplars of the hitherto undescribed animal fell victims of the traps.

"What we have here is not only a new remarkable organism, but also an amazing and unusual cave critter that has undergone a long evolutionary journey to adapt to the underground environment of Central Asia," says the lead author Alberto Sendra.

The authors see their latest discovery as a proof of the importance of Kaptarhana as a refuge for a number of endemic invertebrates and an opportunity to draw attention to its protection under the laws of Turkmenistan.

"While many speleobiologists consider the terrestrial cave fauna in Central Asia as poor, it is places such as Kaptarhana that can turn the tables by giving us new insights about the biodiversity richness, evolutionary history, formation and functioning of the underground ecosystems of this part of the world." comments Stoev. 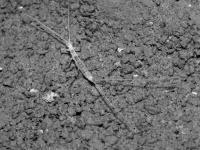