The zirconia chemically converts sand and other corrosive particles that build up on the blade into a new, protective outer coating. In effect, the surface of the engine blade constantly renews itself.

Ultimately, the technology could enable manufacturers to use new kinds of heat-resistant materials in engine blades, so that engines will be able to run hotter and more efficiently.

Nitin Padture, professor of materials science and engineering at Ohio State, said that he had military aircraft in mind when he began the project. He was then a professor at the University of Connecticut.

“In the desert, sand is sucked into the engines during takeoffs and landings, and then you have dust storms,” he said. “But even commercial aircraft and power turbines encounter small bits of sand or other particles, and those particles damage turbine blades.”

Jet engines operate at thousands of degrees Fahrenheit, and blades in the most advanced engines are coated with a thin layer of temperature-resistant, thermally-insulating ceramic to protect the metal blades. The coating -- referred to as a thermal-barrier coating -- is designed like an accordion to expand and contract with the metal.

The problem: When sand hits the hot engine blade it melts -- and becomes glass.

“Molten glass is one of the nastiest substances around. It will dissolve anything,” Padture said.

The hot glass chews into the ceramic coating. But the real damage happens after the engine cools, and the glass solidifies into an inflexible glaze on top of the ceramic. When the engine heats up again and the metal blades expand, the ceramic coating can’t expand, because the glaze has locked it in place. The ceramic breaks off, shortening the life of the engine blades.

In a recent issue of the journal Acta Materialia, Padture and his colleagues described how the new coating forces the glass to absorb chemicals that will convert it into a harmless -- and even helpful -- ceramic.

“The glass literally becomes a new ceramic coating on top of the old one. Then, when new glass comes in, the same thing will happen again. It’s like it’s constantly renewing the coating on the surface of the turbine,” Padture said.

Padture’s former university has applied for a patent on the technique that he devised for embedding the aluminum and titanium into the zirconia. He’s partnering with Inframat Corp., a nanotechnology company in Connecticut, to further develop the technology.

Padture stressed that the technology is in its infancy. He has yet to apply the coatings to complex shapes, and cost is a barrier as well: the process is energy-consuming.

But if that cost eventually came down and the technology matured, the payoff could be hotter engines that burn fuel more efficiently and create less pollution. Manufacturers would be able to use more sophisticated ceramics that boost the heat-resistance of engines. Eventually, technology could go beyond aircraft and power-generator turbines and extend to automobiles as well, Padture said.

His coauthors on the Acta Materialia paper included Ohio State doctoral student Aysegul Aygun, who is doing this work for her dissertation; former postdoctoral researcher Alexander Vasiliev, who is now at the Russian Academy of Sciences; and Xinqing Ma, a scientist at Inframat Corp.

This research was funded by the Office of Naval Research and Naval Air Systems Command. 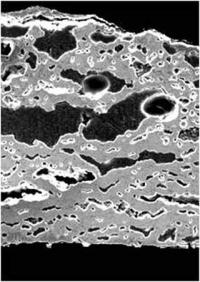