In a paper published in Science Advances, an international team of researchers have examined traits of marine megafauna species to better understand the potential ecological consequences of their extinction under different future scenarios.

Defined as the largest animals in the oceans, with a body mass that exceeds 45kg, examples include sharks, whales, seals and sea turtles.

These species serve key roles in ecosystems, including the consumption of large amounts of biomass, transporting nutrients across habitats, connecting ocean ecosystems, and physically modifying habitats.

Traits, such as how large they are, what they eat, and how far they move, determine species' ecological functions. As a result, measuring the diversity of traits allows scientists to quantify the contributions of marine megafauna to ecosystems and assess the potential consequences of their extinction.

The team of researchers - led by Swansea University's Dr Catalina Pimiento - first compiled a species-level trait dataset for all known marina megafauna to understand the extent of ecological functions they perform in marine systems.

Then, after simulating future extinction scenarios and quantifying the potential impact of species loss on functional diversity, they introduced a new index (FUSE) to inform conservation priorities.

The results showed a diverse range of functional traits held by marine megafauna, as well as how the current extinction crisis might affect their functional diversity.

Sharks are predicted to be the most affected, with losses of functional richness far beyond those expected under random extinctions.

"Our previous work showed that marine megafauna had suffered an unusually intense period of extinction as sea levels oscillated several million years ago. Our new work shows that, today, their unique and varied ecological roles are facing an even larger threat from human pressures."

Given the global extinction crisis, a crucial question is to what extent nature holds a back-up system. In the event of extinction, will there be remaining species that can perform a similar ecological role?

Dr John Griffin, a co-author on the study from Swansea University adds:

"Our results show that, among the largest animals in the oceans, this so-called "redundancy" is very limited - even when you roll in groups from mammals to molluscs. If we lose species, we lose unique ecological functions. This is a warning that we need to act now to reduce growing human pressures on marine megafauna, including climate change, while nurturing population recoveries."

The newly introduced conservation metric, FUSE (Functionally Unique, Specialised and Endangered) identifies threatened species of particular importance for functional diversity. The highest-scoring FUSE species include the green sea turtle, the dugong and the sea otter. A renewed focus on these, and other highly-scoring FUSE species, will help ensure the maintenance of ecological functions provided by marine megafauna. 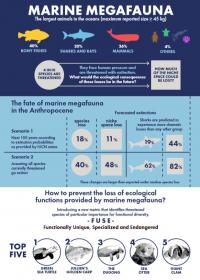