A new species of giant bird-like dinosaur--which tended to enormous nests that were bigger than a monster truck tire--has been discovered in Henan, China.

The new species, named Beibeilong, lived about 90 million years ago during the Cretaceous Period. It is described by a joint Chinese-Canadian-Slovakia team based on a number of large eggs and an associated embryo that were collected in China in the early 1990s but then exported out of the country.

At one time, many fossil eggs collected in Henan were being exported out of China to other countries. "This particular fossil was outside the country for over 20 years and its return to China finally allowed us to properly study the specimen and name a new dinosaur species, Beibeilong sinensis or baby dragon from China." says Prof. Lü Junchang, a paleontologist at the Institute of Geology, Chinese Academy of Geological Sciences.

The eggs are up to 45 centimeters long and weighed about five kilograms, making them some of the largest dinosaur eggs ever discovered. They were found in a ring-shaped clutch, which was part of a nest that was about 2-3 meters in diameter and probably contained two dozen or more eggs.

"For many years it was a mystery as to what kind of dinosaur laid these enormous eggs and nests. Because fossils of large theropods, like tyrannosaurs, were also found in the rocks in Henan, some people initially thought the eggs may have belonged to a tyrannosaur," says Dr. Darla Zelenitsky, a professor at the University of Calgary who was part of the research team that described the fossil. "Thanks to this fossil, we now know that these eggs were laid by a gigantic oviraptorosaur, a dinosaur that would have looked a lot like an overgrown cassowary. It would have been a sight to behold with a three ton animal like this sitting on its nest of eggs."

Study of the bones of an embryo that died while hatching out of one of the eggs reveals that the egg-layer is a new species of oviraptorosaur, a type of feathered, wing-bearing, beaked dinosaur closely related to birds. Although bones of the adult are not known, it was probably in the ballpark of eight meters long and 3 tons in body mass, based on comparison to close relatives.

Because fossils of smaller-bodied, close relatives have been fossilized while sitting on top of their eggs, the authors describe the new giant oviraptorosaur species as the largest known dinosaur to have sat on its nest and cared for its young.

"The fossils were originally collected by farmers in Henan Province of China in 1993, but were subsequently exported out of China to the USA. The eggs and embryo gained worldwide fame when they were featured in a National Geographic article in 1996, but it was impossible to describe them in a scientific journal--and to name the new species--until the fossils were repatriated to China," says Prof. Philip Currie, a professor and research chair at the University of Alberta.

Recently the fossils were returned to China and permanently accessioned into the Henan Geological Museum. This allowed the Chinese-Canadian team to study them, and they present their results today in a paper in the leading journal Nature Communications. 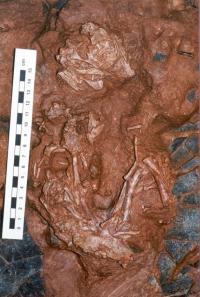