New light is shed on the famous paradox of Einstein, Podolsky and Rosen after 80 years. A group of researchers from the Faculty of Physics at the University of Warsaw has created a multidimensional entangled state of a single photon and a trillion of hot rubidium atoms. This hybrid entanglement has been stored in the laboratory for several microseconds. The research has been published in the prestigious Optica journal.

In their famous Physical Review article published in 1935, A. Einstein, B. Podolsky and N. Rosen have considered a decay of a particle into two products. In their thought-experiment, two products of decay were projected in exactly opposite directions, or more scientifically speaking their momenta were anti-correlated. It would not be a mystery within the framework of classical physics, however when applying the rules of the Quantum theory, the three researchers quickly arrived at a paradox. The Heisenberg uncertainty principle, dictating that position and momentum of a particle cannot be measured at the same time within arbitrary precision, lies at the center of this paradox. In Einstein's thought-experiment one can measure momentum of one particle and immediately know momentum of the other without measurement, as it is exactly opposite. Then, one only needs to measure position of this second particle and the Heisenberg uncertainty principle seems to be violated, which seriously baffled the three physicists.

In the Quantum Memories Laboratory at the University of Warsaw, the group of three physicists was first to create such an entangled state consisting of a macroscopic object - a group of about one trillion atoms, and a single photon - a particle of light. "Single photons, scattered during the interaction of a laser beam with atoms, are registered on a sensitive camera. A single registered photon carries information about the quantum state of the entire group of atoms. The atoms may be stored, and their state may be retrieved on demand." - says Michal Dabrowski, PhD student and co-author of the article.

The results of the experiment confirm that the atoms and the single photon are in a joint, entangled state. By measuring position and momentum of the photon, we gain all information about the state of atoms. To confirm this, polish scientists convert the atomic state into another photon, which again is measured using the state-of-the-art camera developed in the Quantum Memories Laboratory. "We demonstrate the Einstein-Podolsky-Rosen apparent paradox in a very similar version as originally proposed in 1935, however we extend the experiment by adding storage of light within the large group of atoms. Atoms store the photon in a form of a wave made of atomic spins, containing one trillion atoms. Such a state is very robust against loss of a single atoms, as information is spread across so many particles." - says Michal Parniak, PhD student taking part in the study.

The experiment performed by the group from the University of Warsaw is unique in one other way as well. The quantum memory storing the entangled state, created thanks to "PRELUDIUM" grant from the Poland's National Science Centre and "Diamentowy Grant" from the Polish Ministry of Science and Higher Education, allows for storage of up to 12 photons at once. This enhanced capacity is promising in terms of applications in quantum information processing. "The multidimensional entanglement is stored in our device for several microseconds, which is roughly a thousand times longer than in any previous experiments, and at the same time long enough to perform subtle quantum operations on the atomic state during storage" - explains Dr. Wojciech Wasilewski, group leader of the Quantum Memories Laboratory team.

The entanglement in the real and momentum space, described in the Optica article, can be used jointly with other well-known degrees of freedom such as polarization, allowing generation of so-called hyper-entanglement. Such elaborate ideas constitute new and original test of the fundamentals of quantum mechanics - a theory that is unceasingly mysterious yet brings immense technological progress.

Quantum entanglement between a single photon and a trillion of atoms 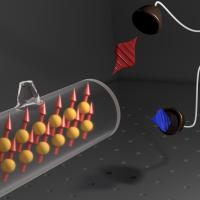