Spring is coming, and with it comes the promise of warmer weather, longer days and renewed life.

For residents of the Pacific Northwest, one of the most idyllic scenes of this renewed life is the wildflowers that light up Mount Rainier's subalpine meadows once the winter snowpack finally melts. These floral ecosystems, which typically arrive in summer, are an iconic feature of Mount Rainier, and a major draw for the more than 1 million tourists, hikers and nature-lovers who visit the national park each spring and summer.

But without cuts to our carbon emissions, by the end of this century, scientists expect that snow in the subalpine meadows will melt months earlier due to climate change. New research led by the University of Washington shows that, under those conditions, many visitors would miss the flowers altogether.

The research team made this discovery using crowd-sourced photos of Mount Rainier's subalpine meadows taken from 2009 to 2015 and uploaded to the photo-sharing site Flickr. As they report in a paper published Dec. 9 in Frontiers in Ecology and the Environment, 2015 was an unusually warm, dry year when snow melted and disappeared from the meadows about two months earlier than usual. As a result, wildflower season was shorter and arrived earlier. But Flickr photos showed that visits by people to Mount Rainier in 2015 peaked later than the flowers, after the height of wildflower season.

"We know from park surveys that the wildflowers are a major reason people visit Mt. Rainier National Park," said lead author Ian Breckheimer, a researcher at Rocky Mountain Biological Laboratory and Harvard University who conducted this study as a UW doctoral student in biology. "They're an iconic resource, drawing people from around the world."

The team, led by UW biology professor and senior author Janneke Hille Ris Lambers, downloaded and analyzed more than 17,000 photos on Flickr taken in the subalpine region of Mount Rainier National Park from 2009 to 2015. The team used publicly accessible images that contained embedded GPS data, which allowed the team to know where in the park the photos were taken. They scored the images for the presence or absence of blooms from 10 species of wildflowers common to the subalpine meadows.

"These are a very nontraditional source of data, but they proved to be very informative," said Hille Ris Lambers. "It allowed us to see when the flowers were blooming at a lot of different locations around the park."

According to their model, for every 10 days of earlier snowmelt compared to today's average, peak bloom in the subalpine meadows comes 7.1 days earlier and the total bloom season shortened by 0.36 days. People come earlier, too: Peak visits occurred about 5.5 days earlier. But that doesn't keep pace with the flowers. In 2015, when snow melt was about two months earlier, the researchers discovered a 35% decrease in match between peak wildflower season and peak visits to the park compared to a late-melt year like 2011.

The study is among the first to examine the relationships in timing between people and a changing ecosystem, which raises questions for management of parks and preserves -- and how to communicate with the public. The team only measured "mismatch" between wildflowers and visitors after the fact. With additional research, scientists may be able to predict outlying years early, alerting the public to visit sooner than normal to view the meadows.

This isn't just about missed connections between wildflowers and people. Conditions in 2015 were an outlier by today's standards; by the end of this century, scientist predict that 2015-style early snowmelts could be a regular occurrence. Beyond changes in peak bloom times, Hille Ris Lambers' group has shown that in 2015 species bloomed in a different order, creating "reassembled" communities with unknown consequences. The meadows also are facing other stressors as the climate warms.

"These subalpine ecosystems are in real trouble," said Breckheimer. "For example, climate change is allowing trees to encroach into the meadows at Mount Rainier and other sites across the West, and the meadows are not moving uphill as fast as the trees."

It's critical to retain public support for these precious natural resources, Breckheimer added.

"There's a real question whether -- or how much -- we should intervene to protect meadows, by clearing trees through active management, for example, as we keep pushing ecosystems with climate change, and those systems keep getting further out of equilibrium," said Breckheimer. "If visitor peak and flower peaks are at different times, it might affect public support for some of these measures for how public lands are managed in the face of climate change."

Co-authors are Elli Theobald, a UW instructor in biology who conducted this research as a UW doctoral student; Nicoleta Cristea, a UW research scientist in the Department of Civil & Environmental Engineering and the eScience Institute; Anna Wilson with the Free Science Project; Jessica Lundquist, a UW professor of civil and environmental engineering; and Regina Rochefort with the National Park Service.

For more information, contact Breckheimer at ian_breckheimer@fas.harvard.edu and Hille Ris Lambers at jhrl@uw.edu. 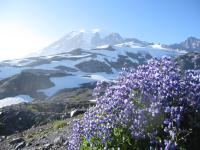