For the first time, scientists have recorded a spring fish migration simply by conducting DNA tests on water samples.

The convenient weekly data snapshots created a moving picture that largely reinforced and correlated with knowledge hard won from migration studies conducted over many years with fishnet trawls.

The Rockefeller University study, published April 12 in PLOS ONE, pioneers a way to monitor fish migrations that involves a fraction of the effort and cost of trawling, all without harming the fish.

It demonstrates as well another in the growing list of eDNA uses, which experts expect to upend soon the way fish assessments are conducted worldwide.

Indeed, eDNA science is quickly granting humanity a very old wish: an easy way to estimate the abundance and distribution of diverse fish species and other forms of marine life in the dark waters of rivers, lakes, and seas.

Led by Senior Research Associate Mark Stoeckle and co-authored by student researcher Lyubov Soboleva and Rockefeller University scientist Zachary Charlop-Powers, the project originated in the university's Program for the Human Environment under Director Jesse Ausubel, co-founder of the Census of Marine Life, a decade-long international collaboration that ended in 2010.

As they swim, fish leave traces of their DNA in the water, sloughed off their slimy, gelatinous outer coating or in excretions, for example.

Says Dr. Stoeckle: "Researchers in Europe first demonstrated that relatively small volumes of freshwater and seawater environments have enough invisible bits of DNA floating in them to detect dozens of fish species."

Introducing the time element: an important and innovative twist

"By conducting a series of tests over time, collecting surface water from the same point on both the Hudson and East Rivers once a week for six months, we've successfully demonstrated a novel way to record fish migration."

"Our work also offers clear new insight into the durability of DNA in the water, which persists despite currents and tides with a goldilocks quality just right for research. If the DNA disappeared too quickly, we couldn't obtain an informative sample; if it persisted for too long, there would be too much DNA in the water to yield useful, timely insights."

In all, Dr. Stoeckle and colleagues obtained the DNA of 42 fish species, including most (81%) of the species known to be locally abundant or common, and relatively few (23%) of the uncommon ones.

"We didn't find anything shocking about the fish migration -- the seasonal movements and the species we found are known already," says Dr. Stoeckle. "That's actually good news, adding to evidence that eDNA is a good proxy. It amazes me that we can get the same information from a small cup of water and a large net full of fish."

Some species, he adds, couldn't yet be distinguished, notably some in the herring family, which have identical sequences in the region of DNA used for testing. As well, some of the DNA obtained couldn't be identified because the DNA reference library, while steadily growing, is incomplete.

"We knew that we had DNA from a fish, but couldn't pinpoint the species," says Dr. Stoeckle.

Notes Mr. Ausubel, the tests turned up the DNA from fish commonly eaten by New Yorkers but not known to inhabit the city's waters -- European sea bass and Nile tilapia, for example -- leading the group to conclude that the DNA of those species entered via the wastewater system.

"We found the DNA of species that we think passed through humans and the wastewater treatment system -- tilapia, salmon and red snapper, for example -- species you shouldn't find swimming in the Hudson River," he says, adding that eDNA could therefore help identify endangered species being sold as food in local stores and restaurants.

One other surprise, says Dr. Stoeckle: the extraordinarily frequent occurrence in samples of Atlantic menhaden, a member of the herring family and a cornerstone species in the food chain.

"One could test the hypothesis that larger populations of menhaden associate with the recent wave of whales in New York Harbor, or the celebrated 2013 dolphin sighting in the East River," he says.

Also intriguingly common: the oyster toadfish, which looks like it could eat a corned beef sandwich, and a strong candidate for the emblematic fish of New York City.

Says Dr. Stoeckle: "Identifying all local species with eDNA, including all the uncommon or rare ones, might be accomplished by collecting and analyzing more water, collecting at different locations, or using a different DNA analysis approach that targets each species individually."

The research found that the number of "reads" of eDNA -- how many copies of tiny DNA segments of a particular species turn up in a sample -- roughly corresponds with data from net surveys.

And that, according to Mr. Ausubel, opens an intriguing new frontier: eDNA may provide a major advance on catch data from trawls, the traditional proxy for assessing the abundance of certain types of fish in a body of water.

Next steps involve fine tuning calibrations, comparing more eDNA "reads" and results with data from traditional surveys conducted with nets and sonar. It is unclear, for example, if 100 DNA "reads" indicate the presence of 1 fish or 10 fish.

Also to be determined: the rate at which different fish and other marine species shed DNA. How much DNA is shed by a particular fish species, or by a hard shelled turtle, for example?

"If future research confirms that an index of species' abundance can be derived from the naked DNA extracted from water, it would address a challenge that has bedevilled scientists for ages. And it could easily improve the rationality with which fish quotas are set and the quality and reliability of their monitoring around the world," says Mr. Ausubel.

"Blood tests," he adds, "have now become so sensitive they can provide evidence of all kinds of conditions in a human body, so it is not really surprising that that we can now learn much more from tests for biological molecules circulating in water."

Beyond low cost and wide applicability, advantages of eDNA surveying include the ability to collect samples without disturbing the fish -- bow waves and engine noise cause many fish to move out of the way and avoid boats conducting net or sonar surveys.

Also, nets often cannot reach bottom and are difficult to deploy in some environments. For example, it's hard to sample fish in the East River, a notoriously difficult channel for ships of all kinds with its strong currents and rocky sides.

"eDNA sampling can be done using standard biology laboratory equipment and techniques" says Rockefeller co-author Zachary Charlop-Powers. "It uses the same methods that medical researchers employ to analyze human "microbiomes," for instance. With current technology, the marginal cost not including labor is about $50/sample when samples are analyzed in batches of 20 or more. Future DNA sequencing developments may lower the cost."

After water is drawn, it is filtered to concentrate the DNA for extraction. The target segment of the DNA is amplified and then sent to a lab for "next-generation" sequencing, the result of which--a record of all the DNA sequences in the sample--is fed into computer software that counts the number of copies of each sequence and searches for matches in an online public reference library.

"Concerned officials and citizen scientists could monitor, for example, the impact of a new oyster farm on local fish populations," added Lyubov Soboleva, a student at New York City’s John Bowne High School and in Rockefeller’s Learning At The Bench After School Program (LAB-ASP) and Summer Science Research Program (SSRP).

Other examples of eDNA's practical uses include:

"Though this field of research is still in its early days, it's easy to foresee many applications for eDNA sampling," says Tony MacDonald, Director of the Urban Coast Institute at Monmouth University, and a collaborator on scientific projects at Rockefeller University's Program for the Human Environment. "It represents a potentially important advance in our capability to detect, understand and more effectively and efficiently manage fisheries and marine biodiversity." "If you are a fishery scientist, there is a very good chance that you are going to be using eDNA as part of your work in the next 10 years."

The research follows an earlier study The Rockefeller University group conducted in Central Park with the help of high school students, in which over a dozen species were identified in a half-cup of pond water drawn from "The Loch."

Other tests of eDNA's reliability were conducted successfully using water from the tanks of the New York City Aquarium.

About the Program for the Human Environment

The work on aquatic DNA was carried out as part of the Marine Science and Policy Initiative of the Program for the Human Environment (The Rockefeller University) and the Urban Coast Institute (Monmouth University).

About Program for the Human Environment eDNA studies

Naked DNA in water tells if fish have arrived 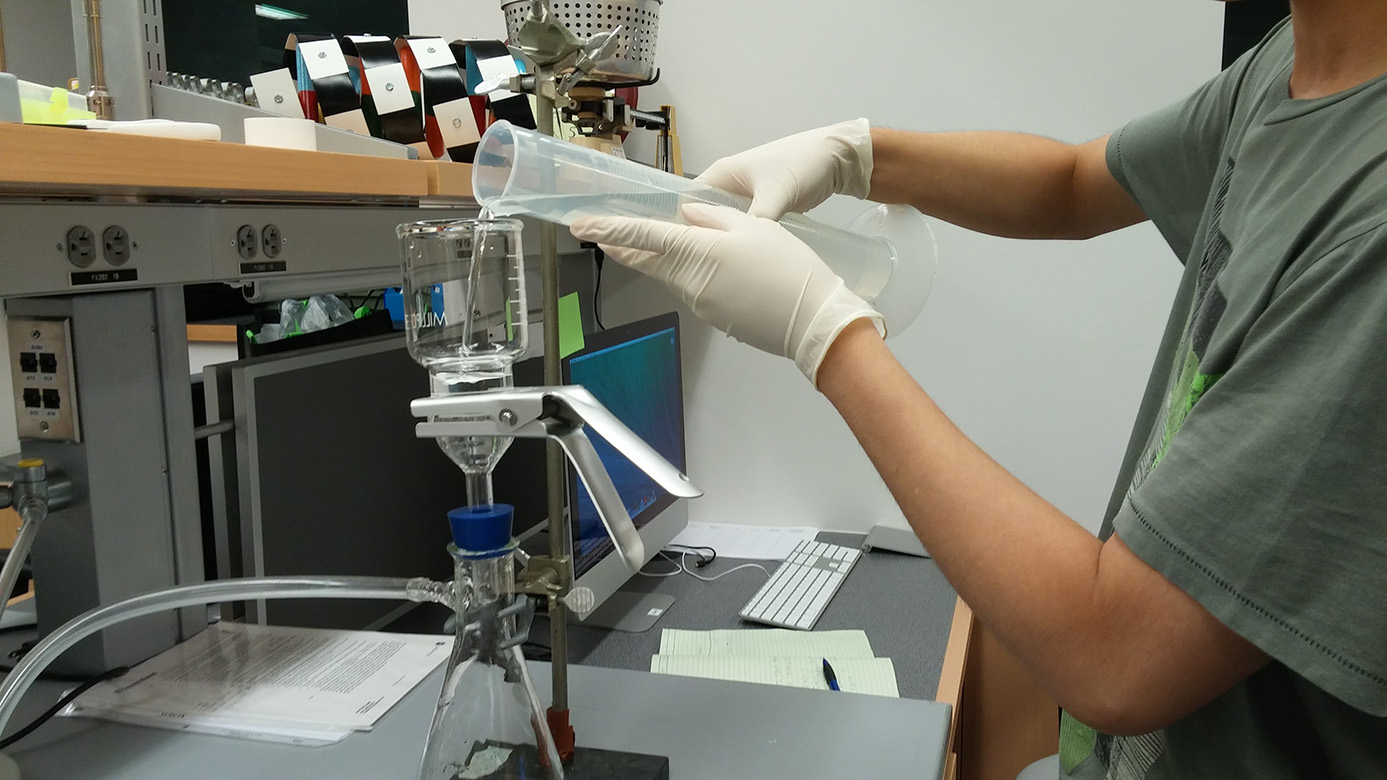