Bats do a lot of good for the world--they pollinate plants, they eat disease-carrying insects, and they help disperse seeds that help with the regeneration of tropical forest trees. Bats and a range of other mammal groups are also natural carriers of coronaviruses. To better understand this very diverse family of viruses, which includes the specific coronavirus behind COVID-19, scientists compared the different kinds of coronaviruses living in 36 bat species from the western Indian Ocean and nearby areas of Africa. They found that different groups of bats at the genus and in some cases family level had their own unique strains of coronavirus, revealing that bats and coronaviruses have been evolving together for millions of years.

"We found that there's a deep evolutionary history between bats and coronaviruses," says Steve Goodman, MacArthur Field Biologist at Chicago's Field Museum and an author of a paper just released in Scientific Reports detailing the discovery. "Developing a better understanding of how coronaviruses evolved can help us build public health programs in the future." The study was led by Université de La Réunion scientists Léa Joffrin and Camille Lebarbenchon, who conducted the genetic analyses in the laboratory of "Processus infectieux en milieu insulaire tropical (PIMIT)" on Réunion Island, focusing on emerging infectious diseases on islands in the western Indian Ocean.

A lot of people use "coronavirus" as a synonym for "COVID-19," the kind of coronavirus causing the current pandemic. However, there are a vast number of types of different coronaviruses, potentially as many as bat species, and most of them are unknown to be transferred to humans and pose no known threat. The coronaviruses carried by the bats studied in this paper are different from the one behind COVID-19, but by learning about coronaviruses in bats in general, we can better understand the virus affecting us today.

All animals have viruses that live inside them, and bats, as well as a range of other mammal groups, happen to be natural carriers of coronaviruses. These coronaviruses don't appear to be harmful to the bats, but there's potential for them to be dangerous to other animals if the viruses have opportunities to jump between species. This study examines the genetic relationships between different strains of coronaviruses and the animals they live in, which sets the stage for a better understanding of the transfer of viruses from animals to humans.

Goodman, who has been based on Madagascar for several decades, and his colleagues took swab and some cases blood samples from more than a thousand bats representing 36 species found on islands in the western Indian Ocean and coastal areas of the African nation of Mozambique. Eight percent of the bats they sampled were carrying a coronavirus.

"This is a very rough estimate of the proportion of infected bats. There is increasing evidence for seasonal variation in the circulation of these viruses in bats, suggesting that this number may significantly vary according to the time of the year," says Camille Lebarbenchon, Disease Ecologist at the Université de La Réunion.

The researchers ran genetic analyses of the coronaviruses present in these bats. By comparing the coronaviruses isolated and sequenced in the context of this study with ones from other animals including dolphins, alpacas, and humans, they were able to build a giant coronavirus family tree. This family tree shows how the different kinds of coronavirus are related to each other.

"We found that for the most part, each of the different genera of families of bats for which coronavirus sequences were available had their own strains," says Goodman. "Moreover, based on the evolutionary history of the different bat groups, it is clear that there is a deep coexistence between bats (at the level of genus and family) and their associated coronaviruses." For example, fruit bats of the family Pteropodidae from different continents and islands formed a cluster in their tree and were genetically different than the coronavirus strains of other groups of bats found in the same geographical zones.

The team found that in rare cases, bats of different families, genera, and species that live in the same caves and have closely spaced day roost sites shared the same strain of coronavirus. But in this study, the transmission between species is the exception, not the rule. "It is quite reassuring that the transmission of coronavirus in the region between two bat species seems to be very rare given the high diversity of bat coronaviruses. Next, we need to understand environmental, biological, and molecular factors leading to these rare shifts" says Léa Joffrin, a disease ecologist who worked on bat coronavirus during her PhD at the Université de La Réunion.

Learning how different strains of coronavirus evolved could be key for preventing future coronavirus outbreaks. "Before you can actually figure out programs for public health and try to deal with the possible shift of certain diseases to humans, or from humans to animals, you have to know what's out there. This is kind of the blueprint," says Goodman.

Co-author Patrick Mavingui, microbial ecologist and head of the PIMIT Laboratory adds, "The development of serological methods targeting coronavirus strains circulating in the Indian Ocean will help show whether there have already been discrete passages in human populations, and their interaction with the hosts will allow a better understanding of the emergence risk."

The study also highlights the importance of museum collections, says Goodman. The researchers used, in part, bat specimens housed in the Field Museum, to confirm the identities of the animals employed in this study. These voucher specimens helped them confidently say which bats and from which geographical regions hosted the different strains of coronaviruses. The research also drew from genetic databases like GenBank. "This information is important for public health, and the point of departure is closely linked to museum specimens," says Goodman. "We're able to use museum material to study the evolution of a group of viruses and its potential applications across wildlife in the world."

Goodman also notes that despite the fact that bats carry coronaviruses, we shouldn't respond by harming or culling of bats in the name of public health. "There's abundant evidence that bats are important for ecosystem functioning, whether it be for the pollination of flowers, dispersal of fruits, or the consumption of insects, particularly insects that are responsible for transmission of different diseases to humans," he says. "The good they do for us outweighs any potential negatives."

This study was contributed to by researchers from the PIMIT laboratory (Université de La Réunion/INSERM/CNRS/IRD), Association Vahatra, the Field Museum, Eduardo Mondlane University, University of Kwa-Zulu Natal, the National Parks and Conservation Service of Mauritius, the Seychelles Ministry of Health, and Instituto Nacional de Saúde.

Coronaviruses and bats have been evolving together for millions of years 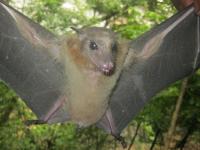