Plants don't sleep like humans do--but just like some people don't rest well in the heat, some plants don't either. The canola plant isn't as productive if the temperature is high at nighttime, and scientists are trying to find out why.

You might know canola from the canola oil on grocery store shelves. The plant grows to be between 3-5 feet tall with small yellow flowers. The resulting seeds are harvested and crushed to make canola oil and meal.

But you may be surprised at canola's importance. "Canola is the third largest source of vegetable oil that humans eat," says Meghnath Pokharel, a doctoral student in agronomy at Kansas State University. "Similarly, canola meal is the second largest feed meal after soybean meal. The major portion of canola meal in the United States is fed to dairy cows because the high fat content of the meal helps milk production. In addition, it is also used as a source of biodiesel."

In the United States, its production is concentrated in the Northern Plains and southeastern states. Worldwide, the cool season crop is grown mostly in winter. It is highly vulnerable to high-temperature stress: when temperatures rise, productivity falls.

The researchers have found that winter-grown canola is particularly affected by nighttime temperature rises during the flowering and seed-forming stages. Temperatures of 68-73 degrees Fahrenheit have a significant negative impact on yield, the researchers say.

What exactly is the plant doing at night? It's not sleeping like humans do, but it is carrying out important processes that impact how much oil it can produce. During the night, the plant performs maintenance at the cellular level. This allows it to have enough energy to grow new cells and repair damaged ones.

In the case of canola, it must also flower, produce pollen, be pollinated, generate a pod, and finally create seeds in a pod. The final amount of oil or meal that comes from canola is largely determined by the number of pods, the seeds per pod, and individual seed weight.

All of these important steps are limited when the temperature increases, including during nighttime.

In their research, the scientists studied many different aspects of the canola plant. For example, they looked at what time of day the plants flower under normal conditions compared to high nighttime temperatures. The group also looked at the quality of the final seeds.

"The temperatures caused the flowering to shift to earlier hours of the morning," Pokharel explains. "The timing of flower opening is important for the plant, as it determines aspects related to fertilization and ultimately seed-set."

The researchers say the higher nighttime temperatures will have a long-term impact due to global climate change. In addition, changes in the atmosphere cause the warming effect to be stronger at night. In their research, they also hope to explore how to breed canola that isn't as severely affected by high nighttime temperatures.

"This was the first trial to see the responses of different winter-grown hybrids of canola under high nighttime temperature," Pokharel says. "The results were very exciting! We're looking to develop winter canola with enhanced resilience to future warming scenarios."

No rest for weary canola plants

Funder
, US Department of Agriculture 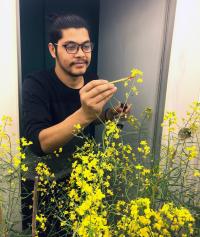