Testing hair from Asian monkeys living close to people may provide early warnings of toxic threats to humans and wildlife, according to a study published online this week in the American Journal of Physical Anthropology.

In parts of South and Southeast Asia, macaques and people are synanthropic, which means they share the same ecological niche. They drink from identical water sources, breathe the same air, share food sources, and play on the same ground.

"Macaques are similar to humans anatomically, physiologically and behaviorally," said the senior author on the study, Dr. Lisa Jones-Engel, a senior research scientist at the National Primate Research Center at the University of Washington in Seattle.

"They are also similar in their response to toxic exposures," said lead author Dr. Gregory Engel, a physician at Swedish Cherry Hill Family Medicine in Seattle and a research scientist at the UW National Primate Research Center. When macaques live in environments polluted by motor vehicles, openly disposed garbage, and industrial waste, they can come into contact with toxic substances such as lead, just as their human neighbors might.

Lead toxicity, the authors noted, remains a significant public health problem around the world. Intense exposure to lead can damage the nervous, circulatory, and reproductive systems, as well as the kidneys and liver. Exposure during childhood, according to other studies, may cause more subtle effects, such as decreased intelligence.

According to Jones-Engel, the researchers hypothesized that young macaques, in particular, would be good sentinels for human exposure to lead exposure.

"Young macaques share a propensity for curiosity and have a penchant for picking up objects and inserting them into their mouths, just as young children do," Jones-Engel noted. "A juvenile macaque has all the curiosity and energy of a toddler, and then some! Plus their parents aren't well informed about environmental hazards."

She and her team of primatologists, physicians, epidemiologists, veterinarians and toxicologists decided to test urban macaques as a potential early indicator that their human neighbors, especially the children, are being exposed to lead and other toxic metals. They took hair samples from three groups of free-ranging macaques at the Swoyambhu temple overlooking Kathmandu, Nepal. The macaques patrolling the site have abundant contact with people and with human-made environments. This World Heritage Site temple is located in a densely populated urban area with poor infrastructure that leaves point sources like discarded lead batteries, flaking leaded paint, and lead contaminated soil, a by-product of decades of leaded fuel, in the environment.

Hair lead levels differed among the three groups of macaques, and were much higher in younger macaques. The researchers' data did not support the idea that these lead levels were from basic differences in the animals' diet, and instead suggested that, in this population of macaques, behavioral or physiological factors among young macaques might play a significant role in determining exposure to lead and subsequent tissue concentration.

Animal sentinels of poisonous conditions for people have been used for a long time. From the 19th century and well into the 20th century coal miners sent canaries into mining shafts to check if the air was safe to breathe.

"While using animal sentinels is not a new phenomenon, we argue that not all animal species are relevant models for human toxicant exposures, but young macaques that share the same ecological niche with humans may be one of the best animal sentinels we have," Engel said.

Scientists testing for environmental exposures also don't want to hurt the animals they are monitoring. Collecting a few hairs is a gentle, non-invasive approach.

The researchers noted, "All of these factors contribute to making synanthropic macaques -- those that share the environment with humans -- potentially valuable as sentinels for toxic exposures and predictors of physiologic responses in humans."

The research team concluded, "Chemical analysis of hair is a promising, non-invasive technique for determining exposure to toxic elements in free-ranging, non-human primates, and further multidisciplinary research is needed to establish whether it can be used to predict lead levels in humans who live in the same areas."

In addition to Engel and Jones-Engel, other researchers on this study were Todd M. O'Hara and Tamara Cardona-Marek of the Institute of Arctic Biology at the University of Alaska, Fairbanks; John Heidrich of Quatros, LLC; Mukesh K. Chalise of the Central Department of Biology, Tribhuvan University; and Randall Kyes of the UW Department of Psychology and the UW National Primate Research Center.

The study was funded by grants from the Defense Advanced Research Projects Agency and the National Institutes of Health. 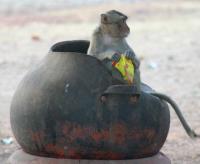 Macaque Sitting in Garbage Can