Scientists in Lyon, a French city famed for its cuisine, have discovered a quick-cook recipe for copious volumes of hydrogen (H2).

The breakthrough suggests a better way of producing the hydrogen that propels rockets and energizes battery-like fuel cells. In a few decades, it could even help the world meet key energy needs — without carbon emissions contributing to the greenhouse effect and climate change.

It also has profound implications for the abundance and distribution of life, helping to explain the astonishingly widespread microbial communities that dine on hydrogen deep beneath the continents and seafloor.

Describing how to greatly speed up nature's process for producing hydrogen will be a highlight among many presentations by Deep Carbon Observatory (DCO) experts at the American Geophysical Union's annual Fall Meeting in San Francisco Dec. 9 to 13.

In a microscopic high-pressure cooker called a diamond anvil cell (within a tiny space about as wide as a pencil lead), combine ingredients: aluminum oxide, water, and the mineral olivine. Set at 200 to 300 degrees Celsius and 2 kilobars pressure — comparable to conditions found at twice the depth of the deepest ocean. Cook for 24 hours. And voilà.

Dr. Daniel, a DCO leader, explains that scientists have long known nature's way of producing hydrogen. When water meets the ubiquitous mineral olivine under pressure, the rock reacts with oxygen (O) atoms from the H2O, transforming olivine into another mineral, serpentine — characterized by a scaly, green-brown surface appearance like snake skin. Olivine is a common yellow to yellow-green mineral made of magnesium, iron, silicon, and oxygen.

The process also leaves hydrogen (H2) molecules divorced from their marriage with oxygen atoms in water.

The novelty in the discovery, quietly published in a summer edition of the journal American Mineralogist, is how aluminum profoundly accelerates and impacts the process.

Finding the reaction completed in the diamond-enclosed micro space overnight, instead of over months as expected, left the scientists amazed. The experiments produced H2 some 7 to 50 times faster than the natural "serpentinization" of olivine.

Over decades, many teams looking to achieve this same quick hydrogen result focused mainly on the role of iron within the olivine, Dr. Andreani says. Introducing aluminum into the hot, high-pressure mix produced the eureka moment.

Dr. Daniel notes that aluminum is Earth's 5th most abundant element and usually is present, therefore, in the natural serpentinization process. The experiment introduced a quantity of aluminum unrealistic in nature.

Jesse Ausubel, of The Rockefeller University and a founder of the DCO program, says current methods for commercial hydrogen production for fuel cells or to power rockets "usually involve the conversion of methane (CH4), a process that produces the greenhouse gas carbon dioxide (CO2) as a byproduct. Alternatively, we can split water molecules at temperatures of 850 degrees Celsius or more — and thus need lots of energy and extra careful engineering."

"Aluminum's ability to catalyze hydrogen production at a much lower temperature could make an enormous difference. The cost and risk of the process would drop a lot."

"Scaling this up to meet global energy needs in a carbon-free way would probably require 50 years," he adds. "But a growing market for hydrogen in fuel cells could help pull the process into the market."

"We still need to solve problems for a hydrogen economy, such as storing the hydrogen efficiently as a gas in compact containers, or optimizing methods to turn it into a metal, as pioneered by Russell Hemley of the Carnegie Institution's Geophysical Laboratory, another co-founder of the DCO."

Deep energy, Dr. Hemley notes, is typically thought of in terms of geothermal energy available from heat deep within Earth, as well as subterranean fluids that can be burned for energy, such as methane and petroleum. What may strike some as new is that there is also chemical energy in the form of hydrogen produced by serpentinization.

At the time of the AGU Fall Meetings, Dr. Andreani will be taking a lead role with Javier Escartin of the Centre National de la Recherche Scientifique in a 40-member international scientific exploration of fault lines along the Mid-Atlantic Ridge. It is a place where the African and American continents continue to separate at an annual rate of about 20 mm (1.5 inches) and rock is forced up from the mantle only 4 to 6 km (2.5 to 3.7 miles) below the thin ocean floor crust. The study will advance several DCO goals, including the mapping of world regions where deep life-supporting H2 is released through serpentinization.

Aboard the French vessel Pourquoi Pas?, using a deep sea robot from the French Research Institute for Exploitation of the Sea (IFREMER), and a deep-sea vehicle from Germany's Leibniz Institute of Marine Sciences (GEOMAR), the team includes researchers from France, Germany, USA, Wales, Spain, Norway and Greece (more information: odemar.weebly.com).

Notes Dr. Daniel, until now it has been a scientific mystery how the rock + water + pressure formula produces enough hydrogen to support the chemical-loving microbial and other forms of life abounding in the hostile environments of the deep.

With the results of the experiment in France, "for the first time we understand why and how we have H2 produced at such a fast rate. When you take into account aluminum, you are able to explain the amount of life flourishing on hydrogen," says Dr. Daniel.

And, she adds: "We believe the serpentinization process may be underway on many planetary bodies — notably Mars. The reaction may take one day or one million years but it will occur whenever and wherever there is some water present to react with olivine — one of the most abundant minerals in the solar system."

Meanwhile, the genetic makeup of Earth's deep microbial life is being revealed through DCO research underway by Matt Schrenk of Michigan State University, head of DCO's "Rock-Hosted Communities" initiative, Tom McCollom of the University of Colorado, Boulder, Steve D'Hondt of the University of Rhode Island, and many other associates.

At AGU, they will report the results of deep sampling from opposite sides of the world, revealing enigmatic evidence of a deep subterranean microbe network.

Using DNA, researchers are finding hydrogen-metabolizing microbes in rock fractures deep beneath the North American and European continents that are highly similar to samples a Princeton University group obtained from deep rock fractures 4 to 5 km (2.5 to 3 miles) down a Johannesburg-area mine shaft. These DNA sequences are also highly similar to those of microbes in the rocky seabeds off the North American northwest and northeastern Japanese coasts.

"Two years ago we had a scant idea about what microbes are present in subsurface rocks or what they eat," says Dr. Schrenk. "Since then a number of studies have vastly expanded that database. We're getting this emerging picture not only of what sort of organisms are found in these systems but some consistency between sites globally — we're seeing the same types of organisms everywhere we look."

"It is easy to understand how birds or fish might be similar oceans apart, but it challenges the imagination to think of nearly identical microbes 16,000 km apart from each other in the cracks of hard rock at extreme depths, pressures, and temperatures" he says.

"In some deep places, such as deep-sea hydrothermal vents, the environment is highly dynamic and promotes prolific biological communities," says Dr. McCollom. "In others, such as the deep fractures, the systems are isolated with a low diversity of microbes capable of surviving such harsh conditions."

"The collection and coupling of microbiological and geochemical data made possible through the Deep Carbon Observatory is helping us understand and describe these phenomena."

Among other major presentations, DCO investigators will introduce a new model that offers new insights into water / rock interactions at extreme pressures 150 km (93 miles) or more below the surface, well into Earth's upper mantle. To now, most models have been limited to 15 km, one-tenth the depth.

"The DCO gives a happy twist to the phrase 'We are in deep water'," says researcher Dimitri Sverjensky of Johns Hopkins University, Baltimore MD.

Dr. Sverjensky's work, accepted for publication by the Elsevier journal Geochimica et Cosmochimica Acta, is expected to revolutionize understanding of deep Earth water chemistry and its impacts on subsurface processes as diverse as diamond formation, hydrogen accumulation, the transport of diverse carbon-, nitrogen- and sulfur-fed species in the mantle, serpentinization, mantle degassing, and the origin of Earth's atmosphere.

In deep Earth, despite extreme high temperatures and pressures, water is a fluid that circulates and reacts chemically with the rocks through which it passes, changing the minerals in them and undergoing alteration itself — a key agent for transporting carbon and other chemical elements. Understanding what water is like and how it behaves in Earth's deep interior is fundamental to understanding the deep carbon cycle, deep life, and deep energy.

This water-rock interaction produces valuable ore deposits, creates the chemicals on which deep life and deep energy depend, influences the generation of magma that erupts from volcanoes — even the occurrence of earthquakes. Humanity gets glimpses of this water in hot springs.

Says Dr. Sverjensky: "The new model may enable us to predict water-rock interaction well into Earth upper mantle and help visualize where on Earth H2 production might be underway."

The DCO is now in the 5th year of a decade-long adventure to probe Earth's deepest geo-secrets: How much carbon is stored inside Earth? What are the reservoirs of that carbon? How does carbon move among reservoirs? How much carbon released from Earth's deep interior is primordial and how much is recycled from the surface? Are there deep abiotic sources of hydrocarbons? What is the nature and extent of deep microbial life? And did deep Earth chemistry play a role in life's origins?

Says Dr. Hazen: "Bringing together experts in microbes, volcanoes, the micro-structure of rocks and minerals, fluid movements, and more is novel. Typically these experts don't connect with each other. Integrating such diversity in a single scientific endeavor is producing insights unavailable until the DCO."

Ninety percent or more of Earth's carbon is thought to be locked away or in motion deep underground, he notes, a hidden dimension of the planet as poorly understood as it is profoundly important to life on the surface.

DCO is hosting several events both before and during the AGU Fall Meeting 2013 and a large number of presentations are being given at the by DCO scientists from all four research communities — deep life, deep energy, extreme physics and chemistry, and reservoirs and fluxes (for DCO presentations at AGU).

A 10-year global quest to discover the quantity, movements, origins, and forms of Earth's deep carbon; to probe the secrets of volcanoes and diamonds, sources of gas and oil, and life's deep limits and origins; and to report the known, unknown, and unknowable by 2019.

The DCO continues to seek the collaboration and contributions of all scientists interested in the unfolding, and as yet untold, story of carbon in Earth. Conducting expeditions, laboratory experiments, and simulations, we ultimately aim to advance significantly, and perhaps change fundamentally, our understanding of carbon and the role it plays in our lives. 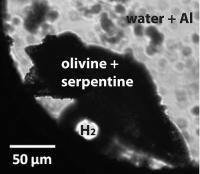