Osaka, Japan - Fertilization is a fundamental process in sexual reproduction when the combination of male and female gametes blends genetic material to create a new unique individual. Now, researchers from Japan have identified a new factor that may help orchestrate this vitally complex life event.

In a recent study, researchers from Osaka University and Baylor College of Medicine have identified a novel protein that takes part in sperm-oocyte membrane fusion during fertilization, and named it Fertilization Influencing Membrane Protein (FIMP).

The human body comprises trillions of cells all derived from a single fertilized ovum. Sperm-oocyte fusion is a critical event in mammalian fertilization and three proteins that facilitate this are known. The sperm membrane protein IZUMO1 was discovered in 2005 by this research team and named for a Shinto shrine celebrating marriage. Its counterpart, the oocyte membrane protein JUNO discovered nine years later was named after the Roman goddess of fertility. Together they interact to form a protein complex, with the oocyte tetraspanin protein CD9 contributing. As three proteins cannot explain the complex molecular interactions involved, the search was on for other factors.

"We focused on the testis-specific 4930451I11Rik gene using CRISPR/Cas9-mediated genome editing technology to generate mutant 'knock out' mice with selectively inactivated or 'turned off' genes," explains Dr Yoshitaka Fujihara, Associate Professor at the Research Institute for Microbial Diseases, and lead author of the study. "Although IZUMO1 was present in 4930451I11Rik knockout spermatozoa, they were unable to fuse with oocytes and the KO males proved severely subfertile."

The 4930451I11Rik gene encodes two protein variants, a transmembrane (TM) isoform and a secreted isoform. CRISPR/Cas9-mediated deletion and transgenic rescue showed that only the TM isoform is essential for sperm-oocyte fusion. The researchers named the TM isoform 'Fertilization Influencing Membrane Protein' and clarified that it is essential for fertilization, functioning in membrane fusion through a different pathway or stage from IZUMO1. Fluorescence mCherry tagging localized FIMP to the sperm equatorial segment where sperm-oocyte fusion occurs.

Professor Masahito Ikawa, co-discoverer of IZUMO1 and senior author, speculates on the implications and future trends of their research. "Our findings support a potential role of human FIMP in sperm function. Further studies are needed to examine the cause of male infertility in Fimp knockout mice and to clarify the interaction of similar type I transmembrane proteins localized on the sperm head. This knowledge could be used to develop novel in vitro and in vivo infertility treatments as well as non-hormonal male-specific contraceptives."

The article "Spermatozoa lacking Fertilization Influencing Membrane Protein (FIMP) fail to fuse with oocytes in mice" was published in Proceedings of the National Academy of Sciences at DOI: https://doi.org/10.1073/pnas.1917060117 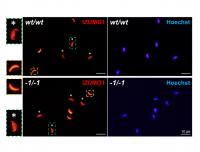 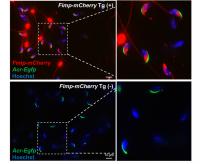