The behavior of living organisms might obey the same mathematical laws as physical phenomena, such as weather and the motion of planets, says new research from the Biological Physics Theory Unit at the Okinawa Institute of Science and Technology Graduate University (OIST).

Physics has a history of successfully predicting and modeling motion across vastly different scales, from molecules to colliding black holes. But when it comes to the behavior of living organisms, the concept is still very new. Recent OIST PhD graduate, Dr. Tosif Ahamed, is therefore part of a group of scientists that are pioneers in this field. His research, published in Nature Physics, used a species of a tiny worm, Caenorhabditis elegans, to propose a framework for capturing the mathematical structure underlying moving animals.

"Neuroscience tends to focus on what goes on inside the brain," Dr. Ahamed said. "But this is often expressed through an animal's movement and behavior. Therefore, understanding their behavior gives us a window into their brains. Recently, there has been an explosion of technology that can record the behavior of animals in high resolution."

Professor Greg Stephens, who leads the OIST Unit, added to this, "Remarkable technological progress has enabled new, precision measurements of living systems on all scales, from molecules of DNA to brain cells, to entire organisms. But we currently lack a fundamental framework for understanding the dynamics of these systems and the sequences of measurements over time. Our work reported here will help change that."

C. elegans have been an important species for many groundbreaking projects in biology and neuroscience but it's their simplicity that made them ideal for this study. As Dr. Ahamed explained, mathematically speaking, the shape of worms on a 2D plate is simply a curve, which is relatively easy to describe.

The research team, which included Dr. Antonio Costa from Vrije Universiteit Amsterdam, used high-video recordings of the worm, and converted the shape in each frame to a set of numbers. To do this, they divided the worm into 100 points and measured the tangent angles at these points. The researchers had previously found that a worm's posture could be represented by just four stereotyped shapes, for which they dubbed 'eigenworms'. Essentially, by mixing these eigenworms in different amounts, anyone can draw what a worm looks like at a given instant.

But in this study the researchers looked deeper. Instead of drawing the worm at a single instant, they sought to 'draw' the dynamics of its behavior, essentially to find the structure in a sequence of worm shapes.

Show someone the instantaneous point of a swinging pendulum and they'll be able to imagine what it looks like at that moment in time, but this tells them nothing about what the pendulum is doing. But show someone the current point and an additional point at a previous time, and they'll know everything about both what the pendulum is doing now and what it will do in the future.

The research group took a similar approach when studying the animals, but this was much trickier than with the pendulum. At first the researchers had to develop a new metric of predictability. This measures the duration for which a system's future could be predicted better than just random guessing. They then collected shape sequences and used them to define a worm's current state. The researchers found seven stereotyped shape sequences, all of which were remarkably interpretable.

However, unlike with the pendulum, the researchers couldn't predict the worm's behavior indefinitely. "It's like with the weather," Dr. Ahamed said. "We're at a point where we can predict the weather with a high level of certainty for today and tomorrow but after that it becomes quite random. If I know what a worm is doing now, then I can tell you quite confidently what it's going to do in the next instant. But once we get to two or three seconds later, it becomes more difficult."

Dr. Ahamed wanted to explore why movement so unpredictable. Further analysis of their data hinted that chaotic dynamics might play a role.

Chaotic dynamics refers to systems in which small uncertainties in measurements can make long-term predictions impossible. This can happen even when a system isn't influenced by random fluctuations.

A classic example of this is a double pendulum. Even if multiple double pendulums are started from roughly the same position, the pendulums will make very different motions after a short period of time.

The research group explored these ideas with the worms. They found that if two worms start with similar behaviors, they will continue to act similarly for a short time (around one second) before their behavior diverges. Remarkably, the time it takes for this divergence to occur is determined by a mathematical quantity, which is a fundamental measure of predictability in chaotic systems.

They also looked at the motion through a more geometry-based lens, by mapping all the points that a worm had been to form a shape. Surprisingly, their results showed that the mathematical structure underlying worm behavior is closely related to one which governs energy-conserving phenomena. This was unexpected as worms, like all biological systems, lose energy through environmental friction and muscle use.

"We never expected to find this structure underlying the behavior" explained Dr. Ahamed. "It was definitely the most surprising part of this research."

Although this study looked specifically at C. elegans, the framework developed should be usable across the biological world.

"People generally don't think that living organisms can be mathematically modeled," said Dr. Ahamed. "But there's a finite number of movements that any animal can make and there's a measurable probability that they'll make certain movements over others. We're now at the stage where we can find mathematical frameworks. Next, we'll develop equations and models to explain these frameworks."

Mapping the chaos of movement 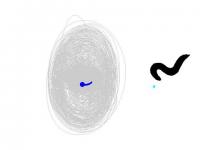