A whopping two hundred and fifty-two million years ago, Earth was crawling with bizarre animals, including dinosaur cousins resembling Komodo dragons and bulky early mammal-relatives, millions of years before dinosaurs even existed. New research shows us that the Permian equator was both a literal and figurative hotspot: it was, for the most part, a scorching hot desert, on top of having a concentration of unique animals. Here, you could find ancient crocodile-sized amphibians right next to newly evolved dinosaur and croc relatives. Many of these species were wiped out after an extinction which changed life on the planet forever.

In a paper published in Earth-Science Reviews, paleontologists studied fossil sites all over the world from the late Permian to get an idea of what lived where. They found an unusual assortment of species near the equator, and one that is comparable to the modern tropics--except that the array of large, carnivorous reptiles would look very out of place anywhere on Earth today.

"The tropics act as a diversity center--stuff that has gone extinct elsewhere is still alive there, and there's new stuff evolving," explains Postdoctoral Researcher Brandon Peecook, co-author of the paper. While it makes sense that the warm, wet rainforests we see now have incredible diversity, it seems counterintuitive that these fiery, hot deserts were home to an exceptional range of species, especially because diversity at the equator fluctuates so much historically.

"The tropics were a breeding ground for biodiversity, in the distant Permian as well as today," says the study's lead author Massimo Bernardi of MUSE - Museo delle Scienze in Trento, Italy.

The foundation of the research was observations made during fieldwork in Bletterbach Valley in northern Italy, which was located near the equator in the Permian. As Evelyn Kustatscher of the Museum of Nature South Tyrol explains: "The Bletterbach is a unique place because of the array of different species present. It's not that there were more individual species present than normal, but that the species that were there were really diverse and represented very different groups in the animal kingdom."

These findings about the late Permian beg the question, "Why are we seeing so much biodiversity at the equator?" This is something scientists have yet to answer, but it shows us that biodiversity at the tropics isn't intuitive, and isn't consistent. What scientists know for sure is that regardless of desert or rainforest, climate change negatively impacts living things.

This unequaled comparison of Permian climate and species distribution to modern events shows us that while many changes are natural and we see them throughout our planet's history, drastic changes like this can be triggered by something much larger--volcanic activity likely caused this in the Permian, and human activity is the suspected culprit today. After the Permian extinction, "it was almost as though the slate had been wiped clean, and all the ecosystems had to rebuild," says Peecook. This event altered life permanently and while new animals evolved and thrived, the process of recovery took millions of years, and the animals that were lost never returned.

"If we want to know how Earth's systems work, what's expected and what's normal, we need to look to the past," and the fossil record is the best measure of ecosystem stability. As we already begin to face extinctions and carbon levels similar to those before the Permian extinction, examining these patterns over time gives us the evidence we need to measure and minimize our impact on climate, preventing further permanent damage to our planet's ecosystems and animals.

The study is part of the research project "The end-Permian mass extinction in the Southern and Eastern Alps" developed by the Museum of Nature South Tyrol, Bolzano, Italy, the MUSE Science Museum, Trento, Italy and the Department of Geology of the University of Innsbruck, Austria. The research was also supported by grants from the National Science Foundation: EAR-1337291, EAR-1337569, and DEB-1501097.

The scientific article is freely accessible thanks to funding for scientific publications of the Research and University Service of the Bolzano Province, Italy.

How much can late Permian ecosystems tell us about modern Earth? A lot 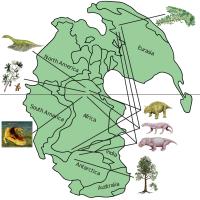